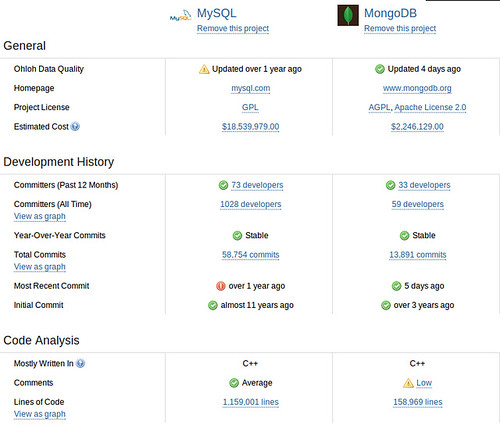 According to Ohloh, MySQL and MongoDB have little in common. One’s seen commits from over a thousand people, the other shy of sixty. One’s 1.1M+ lines of code, the other not even two hundred thousand. And architecturally, the projects are quite distinct.

But in many respects, MongoDB is the new MySQL.

Not because MongoDB is a replacement, as Joseph Ritchey argues in his piece “MongoDB is the New MySQL.”

MySQL became the most popular relational database on the planet by turning its weaknesses into strengths and successfully leveraging its ubiquity. It was, in that respect, one of the original guerrilla success stories in the open source world.

As the market moves ahead into a world with room for both relational datastores and NoSQL alternatives, we can expect to see patterns from the former repeat themselves within the latter. The most obvious of these, to date, is the degree to which MongoDB is following in the footsteps of MySQL.

It would be foolish to predict the same success that MySQL enjoyed for MongoDB, because the underlying market context has changed. But it is clear that – whether it is intentional on 10gen’s part or no – MongoDB is, according to a variety of metrics, the new MySQL.

What does this mean for MongoDB competitors? It certainly does not preclude success; PostgreSQL, after all, remains a vibrant and important project in spite of MySQL’s massive growth. It does mean, however, that projects competing directly with Mongo would do well to study the market conditions that produced MySQL, because they’re about to play themselves out once more.

Disclosure: 10gen, the parent company of MongoDB, is not a RedMonk customer. Several competitive vendors are, however, including Couchbase.