When I talk about DevOps today, it’s about three main things:

However, what doesn’t seem to be appreciated is how this shift, particularly the first and most important aspect of it, changes the roles of developers and operations teams. And that’s regardless of whether the latter group is called sysadmins, SREs, or DevOps engineers. After three recent discussions and inspired partially by Jeff Sussna’s writing on empathy, I figure it was worth sharing this with the rest of the world.

DevOps isn’t just about developers taking on more work and ops learning Puppet, Chef, etc. That may sound obvious, but it’s the way many organizations seem to see it. It’s not just about making developers responsible for code in production, so they’re getting paged at 3am. Despite the DevOps community being so driven by the ops side of the house rather than developers coming into ops, it can’t limit itself to one-way empathy and one-way additional effort. It has to go the other way too. Developers do need to be responsible for their code in production, but ops also need to own up to the importance of maintaining stable infrastructure in dev and test environments. I’ve seen ridicule for Facebook coming out of the CMO for Salesforce.com Marketing Cloud talking about Facebook’s new motto of “Move fast with stable infra” over “Move fast and break things.” But that’s perfectly applicable to this transition, even in spite of it being terrible marketing.

Developers today often own both their application code as well as their environment in dev and maybe test as well, while ops owns applications and infrastructure in production, which the top of this image illustrates: 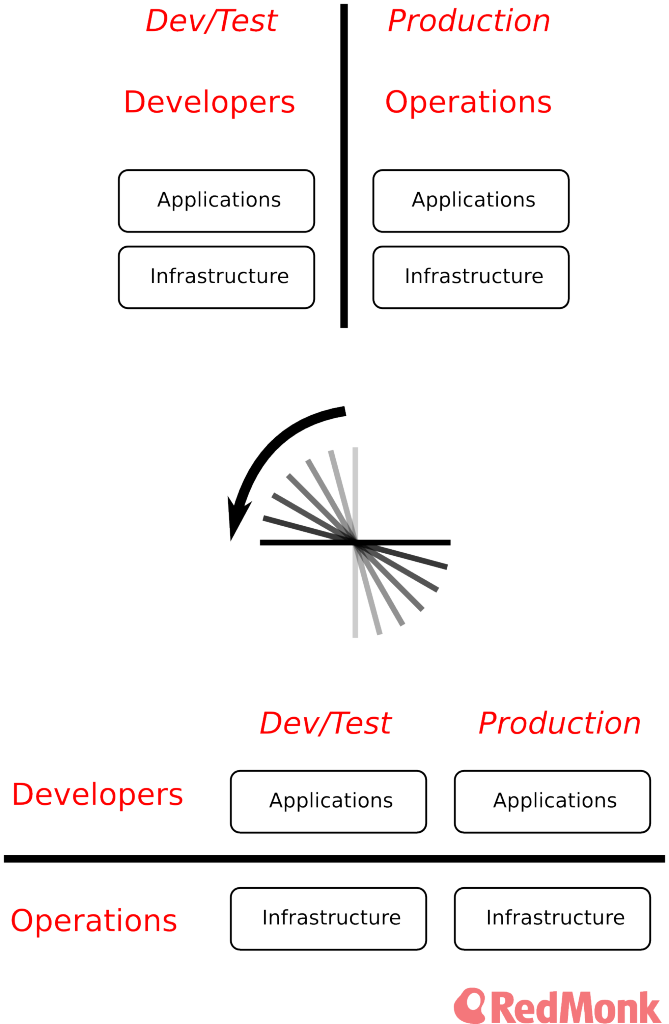 On the bottom of this image, conversely, the separation between dev and ops has rotated. This is key. It also underlies shifts like Red Hat’s incorporation of CentOS and its move to position both CentOS and RHEL as stable environments to innovate on top of in the context of cloud.

And yet, in every case, what’s missing is the understanding and communication that developers must own application-layer code wherever it lives, while ops must own the infrastructure wherever that is. The external system environment is irrelevant — dev/test/production must all have environmental parity from the application’s perspective. Also irrelevant to this point is whether your ops are traditional or are essentially developers building infrastructure tools. In many cases this rotation may involve using tools like Vagrant or Docker to provision identically from the ground up, but the key transition here is a cultural one of bidirectional empathy and bidirectional contribution.

Disclosure: Chef, Red Hat, and Salesforce.com are clients. Puppet Labs has been. DigitalOcean, Facebook, Hashicorp and Docker are not.