Last week, I attended the Santa Clara edition of O’Reilly’s Strata conference, which is all about data. Rumor had it that this was the conference of SQL front-ends to Hadoop (although between Impala, Hadapt, and Spire, I rather thought that was last fall’s Strata NY — apparently it was eclipsed by “real-time” and postponed). And yet, there were another set of new ones this time around, such as Splice Machine, CitusDB, and Pivotal HD [Steve’s coverage].

I was only at Strata for a tutorial and one full day, so I didn’t have the opportunity to take in any sessions because I spent most of my time meeting with companies. Since I didn’t have as much of a chance to take in the feel of the conference this time around, I thought I’d try something different and show some personal analytics based on Strata. I took all of my inbound requests from PR firms/people for meetings (41 in total), then aggregated and categorized them by primary product/service. This reflects a certain facet of the conference, one focused on getting the word out, so it leans toward launches of products and startups rather than mere presence at the show. But one might expect that generally reflects the impression people walk away with regardless — what’s new. 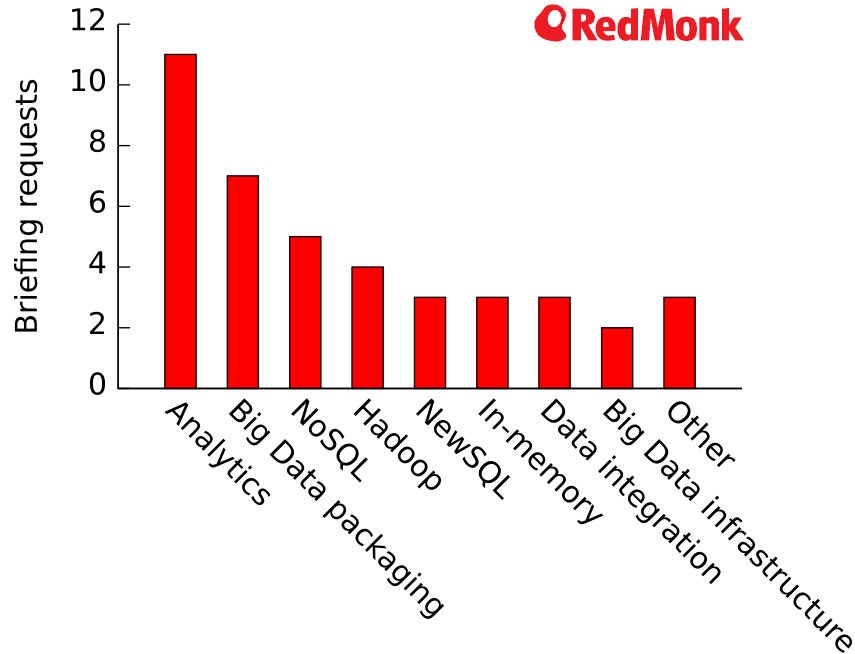 What we see shows an altogether different angle on Strata than merely SQL-on-Hadoop. Instead, we see major focuses on analytics (no surprise), databases of all types including NoSQL, Hadoop, and NewSQL (no surprise), and Big Data packaging [coverage] — this one was intriguing to me. For these purposes, I excluded Hadoop distributions themselves, so packaging includes things like:

Had I included Hadoop distributions in packaging, the number would have been even higher and in fact would have been tied for the most popular segment. But I decided to instead wrap them into Hadoop itself since all of the packaging options here were built on top of Hadoop or an equivalent. The other segments should be largely self-explanatory; Big Data infrastructure means underlying system components to improve Big Data, such as Azul Systems’ Zing JVM.

So, was Strata this year really about SQL? Not from this frame, at least. Instead, it was about using the data — both packaging and analytics are really about enabling people to work with and interpret data more easily.