As a follow-up to yesterday’s post on activation energy and developer adoption, today I’m going to extend the metaphor of chemical reactions by adding the concept of catalysis. In chemistry, catalysts are generally thought to work by lowering the activation energy (Ea) that creates the barrier between initial and final states. In the figure below, we’re seeing a chemical reaction proceed from left to right with the energy peaking right in the middle. In black is the standard reaction, and in red is the catalyzed reaction. 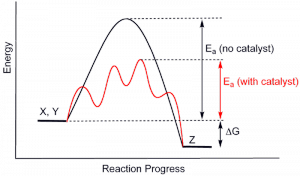 The translation to developer adoption is straightforward: When you’re passing over a barrier to entry (the peak in the middle), you need a certain energy (motivation) to do so. Catalyzing adoption means using all available tools to lower the height of this barrier — as my fellow RedMonk Stephen has written about since at least 2005 — for example:

By creating and providing catalysts for all the barriers in your adoption funnel, you’ll be able to get all those people who may be less motivated initially but have the potential to be great contributors and/or customers in the future.