At our Monki Gras conference this February, the creator of Jenkins, Kohsuke Kawaguchi, gave an outstanding talk on building a community around open-source software.

(Aside: All the videos from Monki Gras are now online at RedMonkTV.)

One of the key concepts he talked about was lowering the barrier to entry for new users, with the great metaphor of a funnel. If you’ve ever heard of a sales funnel, it’s the same idea applied to adoption of software — a multi-step process, where failure at any of the steps kicks people out of the funnel, but success means they proceed to the next step.

In my view, the key point of this funnel metaphor is that the many small barriers to adoption are not independent minor factors. Instead, they’re additive and strongly interdependent, gradually ripping more and more of your potential users out of the adoption funnel.

Let’s take Red Hat’s RHEL as an example, and consider how this affects RHEL’s ability to get developers building software on its platform. Imagine that we start with 100 developers who are thinking about basing development on RHEL. I drew a picture to illustrate how many of these 100 might end up actually developing on RHEL, based on a funnel (with each stick figure representing 10 developers): 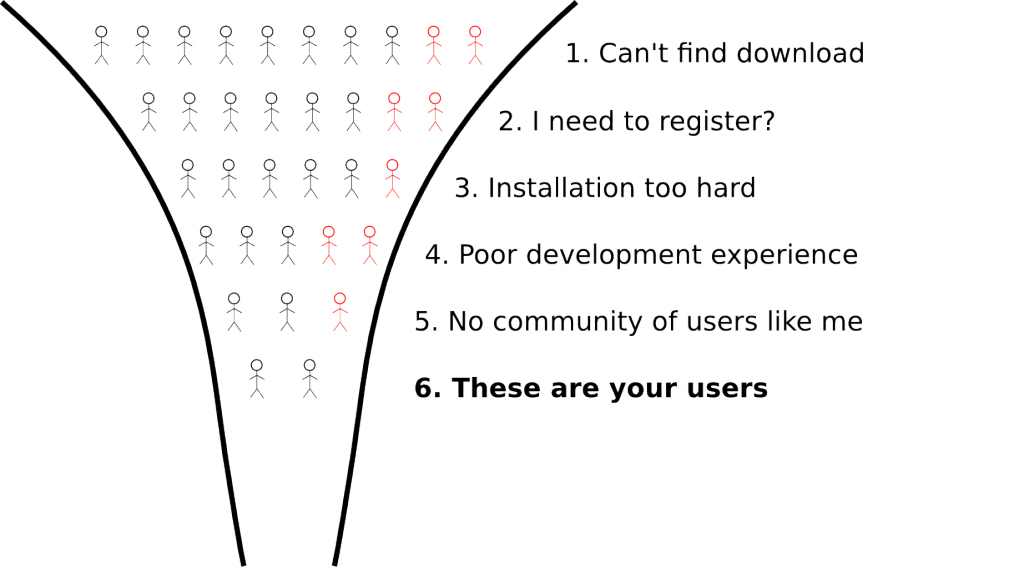 Every time users hit a problem, some percentage of them will give up and move on to an alternative (colored red, above). In the end, you might end up with only 20 out of 100 potential users actually running your software!

So when you’re thinking about the developer experience and how to get more developers running your software, think about the funnel. Here’s the 15-minute video of Kohsuke’s talk:

Disclosure: Red Hat and CloudBees (which employs Kohsuke) are both clients.