For a variety of reasons, not least of which is that fewer people seem to care anymore, it’s been some time since we looked at the popularity of open source licenses. Once one of the more common inquiries we fielded, questions about the relative merits or distribution of licenses have faded as we see both consolidation around choices and increased understanding of the practical implications of various licensing styles. Given the recent affinity for permissive licensing, however, amongst major open source projects such as Cloud Foundry, Docker, Hadoop, Node.js or OpenStack, it’s worth revisiting the question of license choices.

Before we get into the question of how licensing choices have changed, it’s necessary to establish a baseline number for distribution today. While it cannot be considered definitive, Black Duck’s visibility into a wide variety of open source repositories and forges serves as a useful sample size. Based on the Black Duck data, then, the following chart depicts the distribution of usage amongst the ten most popular open source licenses. 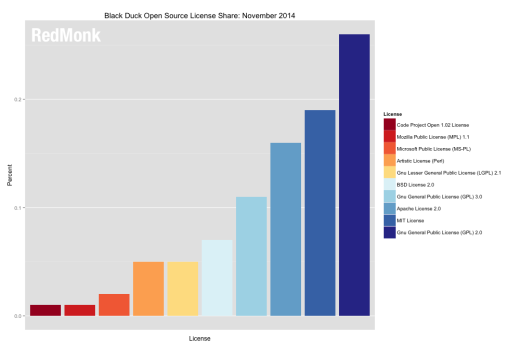 Moving left to right, from less popular licenses to the most popular, it is easy to determine the overall winner. As has historically been the case, the free software, copyleft GPLv2 is the most popular license choice according to Black Duck. Besides high profile projects such as Linux or MySQL, the GPL has been the overwhemingly most selected license for years. The last time we examined the Black Duck data in 2012, in fact, the GPL was more popular than the MIT, Artistic, BSD, Apache, MPL and EPL put together.

Popular as the GPL remains, however, it no longer enjoys that kind of advantage. If we group both versions (2 and 3) of the GPL together, the GPL is in use within 37% of the Black Duck surveyed projects. The three primary permissive license choices (Apache/BSD/MIT), on the other hand, collectively are employed by 42%. They represent, in fact, three of the five most popular licenses in use today.

License selection has clearly changed, then, but by how much? For comparison’s sake, here’s a chart of the percent change in license usage from this month’s snapshot of Black Duck’s data versus one from 2009.

As we can see, the biggest loser in terms of share was the GPLv2 and, to a lesser extent, the LGPLv2.1. The decline in usage of the GPLv2 can to some degree be attributed to copyleft license fans choosing instead the updated GPLv3; that license, released in 2007, gained about 6% share from 2009 to 2014. But with usage of version 2 down by about 24%, the update is clearly not the only reason for decreased usage of the GPL.

Instead, the largest single contributing factor to the decline of the GPL’s dominance – it’s worth reiterating, however, that it remains the most popular surveyed license – is the rise of permissive licenses. The two biggest gainers on the above chart, the Apache and MIT licenses, were collectively up 27%. With the BSD license up 1%, the three most popular permissive licenses are collectively up nearly 30% in the aggregate.

While this shift will surprise some, and suggests that much like the high profile of projects like Linux and MySQL led to wider adoption of reciprocal or copyleft-style licenses, Hadoop and others are leaving a sea of permissively licensed projects in their wake.

But the truth is that a correction of some sort was likely inevitable. The heavily skewed distribution towards copyleft licenses was always somewhat unnatural, and therefore less than sustainable over time. What will be interesting to observe moving forward is whether these trends continue, or whether further corrections are in store. Currently, license preferences seem to be accumulating at either ends of the licensing spectrum (reciprocal or permissive); the middle ground in file-based licenses such as the LGPL/MPL remain a relatively distant third category in popularity. Will MPL-licensed projects like the recently opened Manta or SmartDataCenter change that, or are they outliers?

Whatever the outcome, it’s clear we should expect greater diversity amongst licensing choices than we’ve seen in the past. The days of having a single dominant license are, for all practical purposes, over.

Disclosure: Black Duck, the source of this data, has been a RedMonk client but is not currently.