A week away from August, below are our programming language ranking numbers from June, which represent our Q3 snapshot. The attentive may have noticed that we never ran numbers for Q2; this is because little changed. Which is not to imply that a great deal changed between Q1 and Q3, please note, but rather than turn this into an annual exercise snapshots every six months should provide adequate insight into the relevant language developments occuring over a given time period.

For those that are new to this analysis, it is simply a repetition of the technique originally described by Drew Conway and John Myles White in December of 2010. It seeks to correlate two distinct developer communities, Github and Stack Overflow, with one another. Since that analysis, they have published a more real time version of their data available for those who wish day to day insights. In all of the times that this analysis has been performed, the correlation has never been less than .78, with this quarter’s correlation .79.

As always, there are caveats to be aware of.

With that, here is the third quarter plot for 2013. 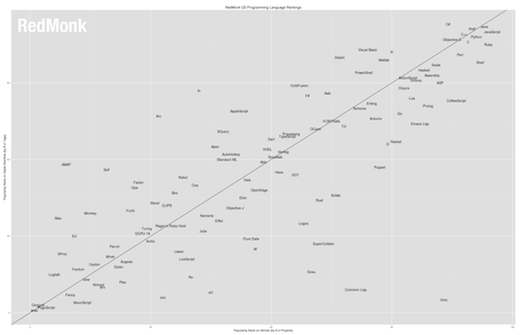 Java advocates are likely to look at the above list and declare victory, but Java is technically tied with JavaScript rather than ahead of it. Still, this is undoubtedly validation for defenders of a language frequently dismissed as dead or dying. Java’s ranking rests on its solid performance in both environments. While JavaScript is the most popular language on Github by a significant margin, it is only the fourth most popular language on Stack Overflow by the measure of tag volume. Java, meanwhile, scored a third place finish on Github and second place on Stack Overflow, leading to its virtual tie with perennial champ JavaScript. Not that this is a surprise; Java has scored a very close second place to JavaScript over the last three snapshots.

Elsewhere, other findings of note.

In general, then, the takeaways from this look at programming language traction and popularity are consistent with earlier findings. Language fragmentation, as evidenced by the sheer number of languages populating the first two tiers, is fully underway. The inevitable result of which is greater language diversity within businesses and other institutions, and the need for vendors to adopt multiple-runtime solutions. More specifically, this analysis indicates a best tool for the job strategy; rather than apply a single language to a wide range of problems, multiple languages are leveraged in an effort to take advantage of specialized capabilities.