As cloud adoption accelerates, one of the more important questions facing users becomes pricing. Because cloud pricing models differ fundamentally from those that preceded them, a full understanding of the economics of the cloud has lagged. While cloud pricing is very accessible, it can be difficult to accurately anticipate costs or project longer term operating expenses. By making it frictionless to consume cloud based assets, cloud vendors have ensured high rates of consumption.

The uncertainty around ongoing operating costs is an area that vendors like Newvem and Rightscale (via their ShopForCloud acquisition) are targeting. But given the lack of generally available information comparing pricing for Infrastructure-as-a-Service options, we’ve collected data on standard available rates and performed a few basic analyses to assist with cost projections. A link to the aggregated dataset is provided below, both for fact checking and to enable others to perform their own analyses, expand the scope of surveyed providers or both.

With the above in mind, one last general statement. This analysis is intended to explore in more detail differentiations in pricing characteristics from provider to provider. Because none of the providers offer exactly the same packages, because most providers have other pricing and product packages available, and because list prices can be negotiated, this research is not intended to serve as a hard basis for cost planning. It is, rather, an attempt to discern where vendors are being aggressive with pricing, and how they differ from one another in these areas.

Specifically what we’re looking for in the charts is slope. The steeper the slope, the more quickly functionality is going up relative to price, or in layman’s terms, the more you get for your money.

With that, here is the cost of disk space relative to the price per hour. 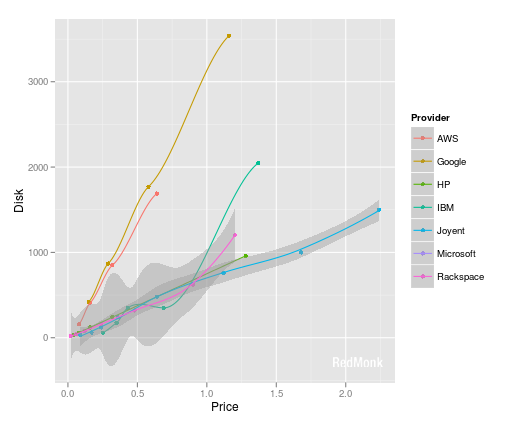 In general, disk space is cheap in the cloud. According to our numbers, the average cost for one gigabyte of disk space in the cloud per month for all providers is $0.73. IBM had the most expensive average cost at $1.47, with Google the cheapest at $0.25. Our graph confirms this, with Google narrowly edging out Amazon for the steepest trajectory, and therefore the most aggressive pricing for disk space. The close mirroring of the Amazon and Google results, not to mention their separation from the other providers, also suggests that Google’s clear target with the Google Compute Engine is Amazon.

Next, we have a chart examining memory relative to hourly costs. 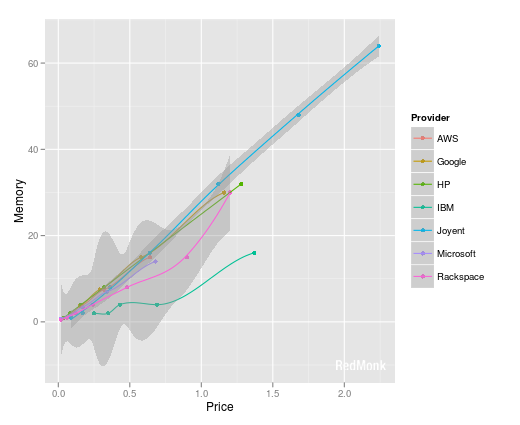 Here, we see far more pricing consistency amongst the providers. Amazon, Google, Joyent, HP and Microsoft are all tightly grouped in their memory pricing, with Rackspace showing variation and IBM’s cloud commanding a premium on a per gigabyte of memory basis. For those wondering why Joyent’s trajectory extends further, it’s because their standard offering list includes the highest available RAM package at 64 GB. 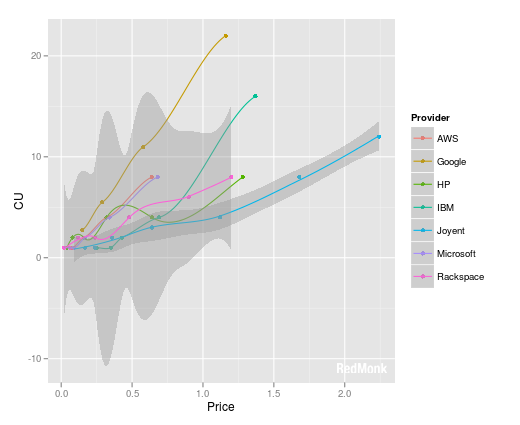 In general, this chart again illustrates the centrality of Amazon as a target for other providers. Microsoft’s price per computing unit very closely mirrors Amazon’s, while Google’s pricing is even more aggressive, presumably as part of their recruitment strategy. Joyent, meanwhile, is the least aggressive of the providers when it comes to computing unit pricing, which likely is a function of their automatic CPU bursting feature. HP, IBM and Rackspace, meanwhile, are neither aggressive nor conservative with their cost per computing unit. This may be a function of their respective audiences, which tend to be more enterprise-focused and therefore somewhat less price sensitive.

Overall, the data suggests obvious areas of opportunity to exploit cloud services as well as areas to focus on from a negotiation standpoint. Disk is predictably cheap, and overall server related storage should not be an issue for cloud customers. Memory is comparatively expensive, at an average of $42.88 per GB per month for all providers, although the skew resistant median is a more modest $32.06. Computing units, meanwhile, are more expensive yet at an average cost of $86.23 / mo (median $63.27/mo). These costs in particular are likely to continue falling, as competitive pressure ramps up with the emergence of more public (and private) cloud providers.

It is also interesting, as noted, to observe the degree to which pricing strategies are clearly built around, or in relation to, Amazon. The data also suggests that exceptions to this pattern are generally enterprise market providers, most obviously IBM, which tend to target customers who historically have had different sensitivities to cost. It will be interesting to see if the public providers like Amazon and those clearly attempting to compete with them on a cost basis, like Google, have a longer term impact on more enterprise-oriented cloud providers with respect to price.

At any rate, the dataset the above research is based on is available here. As mentioned above, you are encouraged to fork it if you wish to expand on it, or notify me of errors/inaccuracies. If spreadsheets offered a pull request mechanism similar to source code repositories, I would encourage that route. In its absence, forked copies will have to suffice.

Additionally, for those who wish to view non-aggregated plots of the above data, I have faceted copies available here: disk, memory and CU.

I look forward to seeing what you all make of this quick look at IaaS pricing data, and what patterns you extract from it.