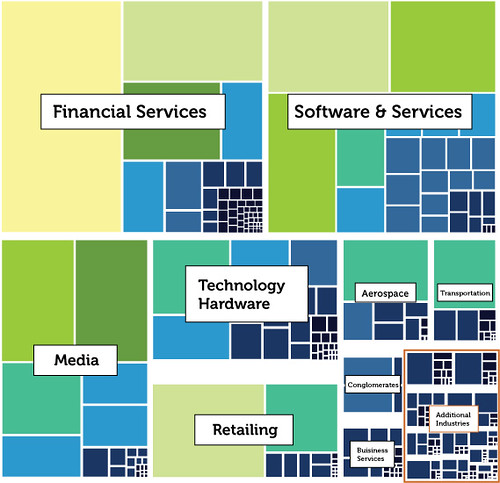 There is no shortage of evidence concerning the value of data, generally. From predicting the flu to the outcome of elections (PDF) to the best practices for dating websites, it’s obvious that knowledge really is power. What’s been lacking, at least according to the conventional wisdom, has been proof points of data being a direct source of revenue.

Apart from telemetry-collecting pioneers like Spiceworks or commercial data marketplaces such as Infochimps, examples of software vendors leveraging their data byproducts have been less common.

That’s about to change. With the release of its Insight product, Sonatype – the company behind Maven – has started down the path towards leveraging its data for the benefit of customers. By monitoring activity in their central repository, Sonatype is in a position to provide fascinating metrics on traction by industry vertical; see the heatmap above. But imagine what they’ll be able to tell their customers about which library version is most popular generally, within customers of their size and within customers in their vertical. Or tell third parties about the popularity of one component versus another. And so on.

Software has value, obviously. But increasingly it will be the data that the software and its users generate that will be the differentiator and the product for vendors. Consider, for example, the level of insight 10gen will be able to provide its support and service customers once it has the ability to analyze the monitoring telemetry from thousands of running Mongo instances, via their recently launched MongoDB Monitoring Service.

We’ve been arguing for data based revenue streams since 2007. The emergence of models like Sonatype Insight in 2011 just proves out our standard maxim regarding predictions: we can always tell you what’s going to happen, we just can’t tell you when.

Disclosure: Sonatype is a RedMonk customer, while 10gen is not.