Of the companies that court developers, it’s difficult to conceive of one that’s more generous with hardware than Google. Just as they once handed out free handsets to stimulate Android application development, Google, as expected issued free Samsung tablets to all five thousand attendees of their annual developer conference. Then they handed out free Verizon LTE mifi devices with three months of free service. And a few weeks from now, they’ll be shipping out free Chromebooks as well.

Whether you believe this largesse is good form or bad on Google’s part – and opinons vary on the subject – it’s a strategy that has shown results for them in the past. Last April, there were 38,000 applications in the Android Market. At present, there are over 200,000. The free hardware creates longer term issues with expectations, as attendees have obviously come to expect free kit. But in the short term, it’s clear that seeding the market in this fashion is likely to produce the desired effect: more applications.

Which are needed for Honeycomb, Google’s tablet-only release. At present, the Featured for Tablets section of the Android Market has 60 items in it. That’s an improvement over the 16 the Xoom launched with in February, but it is not competitive with the iPad’s 65,000 plus.

A large part of the message at I/O this week was around momentum, which is to say Android’s historical performance in the handset market. 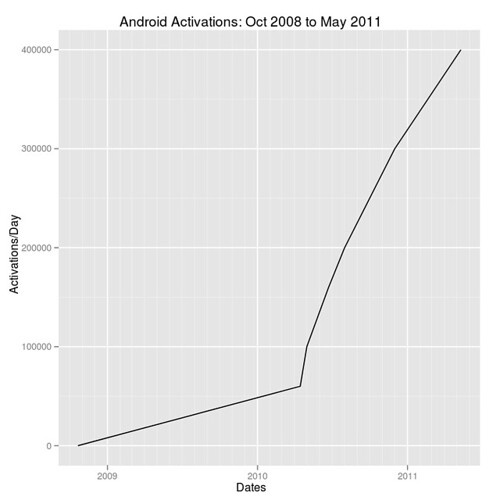 The Android G1 handset was launched in 2008, a year after the iPhone debuted. The Android 1.0 version of the software was, at best, nominally competitive at release. It was the introduction of FroYo last year, however, that made Android a legitimate alternative to Apple’s ground-breaking handset. The May that FroYo was introduced, Google was activating 100,000 Android devices a day. One year later, that number is 400,000. Activation growth, then, is steep. As Asymco’s Horace Dediu put it, “Cumulative total of Android phones sold has reached the cumulative total of iPhones sold.”

How relevant is Android’s performance in a single market, however? There are substantial differences between the markets for handsets and tablets, not least of which is the fact that the mobile phone market is approximately forty years old and competitive, while the market for tablets was created by a one vendor thirteen months ago. Further, Android – like HP with webOS and RIM with the Playbook – was slow to market, with the first Honeycomb tablet arriving eleven months after the introduction of the iPad and fifteen days before the launch of its successor. The absence of competition gave Apple an opportunity to consolidate marketshare that it did not have in the more mature handset market. Expecting Android tablet performance, then, to mirror its handset growth rate is unrealisitic. Certainly Android’s handset momentum has not been predictive for the Google TV product.

This would be more problematic if Google’s expectations were higher in the short term. But the major takeaway from I/O is that the Mountain View firm’s ambitions with respect to Android are substantially broader than handsets and tablets, which necessarily implies a longer term planning horizon.

Google Music and Movies were, to be sure, me too announcements. Amazon beat Google to market by a month with a cloud based music service, and Apple has had movie rentals since 2008. While there are differentiated aspects to both of Google’s new services, they are better characterized as catch up than industry innovation.

Not so the other Android demos. Assigned to the “More” category during the keynote, there are precedents for portions of what Google demoed at IO. The gesture and speaker recognition features, for example, are conceptually similar to Microsoft’s Kinect, and the list of home automation technologies that predated Android @ Home is long. Android’s vision of unifying home automation hubs (Project Tungsten), television (Google TV), cloud media services (Google Music/Movies) and custom hardware (the Arduino based Android ADK), however, is both ambitious and differentiating in its scope. None of Apple, HP, Microsoft and RIM have scoped their platforms quite so wide as Android.

Today’s differentiation can be tomorrow’s distraction, however. Overbroad vision can be a risk in markets with more focused competition. Microsoft’s recent history, to an extent, has been a function of their attempt to dominate multiple non-adjacent software markets. Whether Android’s increasing breadth is ultimately a positive for Google and its partners depends, then, on their ability to manage multiple divergent threads and their ability to execute on same.

Android will not be as competitive as quickly in the tablet market, and the home automation / media markets beyond that are years. But Google clearly understands that becoming competitive in the tablet space is a process, not an easily unlocked achievement. More importantly, they understand that there is but one way to get there: developer adoption and enablement.

Which means that it’s a good time to be a developer. And not just for the free hardware.

Disclosure: Microsoft is a RedMonk customer, while Amazon, Apple and Google are not.