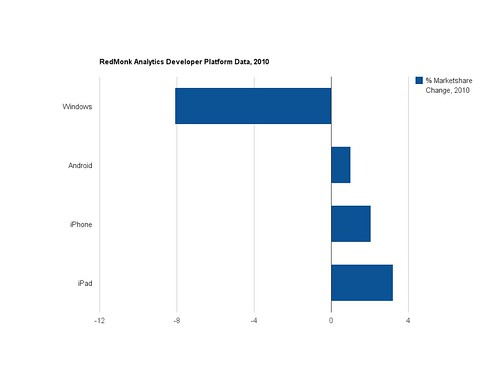 We’ve received a lot of questions and comments on the above graph we published yesterday, not all of which could be addressed within the confines of Twitter’s 140 character constraints. Let me provide some additional context then on what we feel the graph asserts, and conversely, what it does not.

First, let’s clarify the source. The data for that chart is taken directly from our RedMonk Analytics product, and represents the net change by percent in operating system share from January 1, 2010 through December 31, 2010. For internal data like this, the idea for RedMonk Analytics is simple: we publish a lot of free content aimed at developers. Developers consume that content. By watching for patterns in that volume consumption and applying analytics, we are able to form certain conclusions about developer behaviors.

One of the patterns RedMonk Analytics monitors is operating system traction [RedMonk Analytics subscribers: see the “What is Being Used?” report]. With the caveat that we’re merely monitoring consumption behaviors – what developers are reading our content on rather than what they’re actually coding on – a pattern is emerging. Mobile’s gaining, which is not a surprise. What was less expected was the fact that it appears to be gaining primarily at the expense of Windows.

There were hints of this trending when we began examining our year end data, but it wasn’t until we put together a RedMonk Custom Analytics report for a client in the mobile tablet space that the picture became clear.

As the graph indicates, RedMonk properties saw the relative share of Windows usage decline by 8.1% in 2010. The Android, iPhone and iPad platforms gained 6.28% collectively over the same period. Given that Linux and Mac platforms were essentially static on the year, both growing less than 1 percentage point, it seems self-evident that as developers use more mobile platforms, they’re using less Windows.

The data does not support conclusions beyond this, however. Even after the observed decline, Windows leads Mac, the second most popular platform, by nearly thirty percentage points. The trendline should not obscure the absolute performance numbers, which argue that Windows remains the most popular choice amongst developer constitutiences, although its margin varies from developer community to developer community [coverage]. Remember also that our data here reflects consumption based usage; while not probable, it is possible that our data underrepresents production oriented platforms.

Accepting the data as presented, the obvious question is why? If Windows is disproportionately losing share to mobile platforms, what is the cause? It is hardly likely, after all, that Windows machines are being replaced by smartphones, be they of the Android or iPhone variety. Capable as that hardware has become, even its advocates wouldn’t position it as a legitimate alternative to the traditional PC. And yet it declines while Linux and Mac show minimal impact, though potentially less growth. The data suggests no obvious explanations for this trend, but anecdotally it’s worth noting that the developer advocates of both Linux and Mac tend to be more invested in those platforms than their Windows counterparts.

Whatever the explanation, this is a trend worth following. It is clear from our data and market context both that internet users broadly and developers specifically will be increasingly be accessing the network via mobile devices. And while internet consumption is not a zero sum equation in that a portion of mobile usage – time spent reading Twitter while at the supermarket, for example – will be additive, it is clear that one or more operating systems will be losing share if only on a relative basis. At present that operating system is Windows, whether that continues to be the case will be important to Windows’ future.

Android handsets and even Apple’s mobile hardware are rounding errors next to the share that Windows currently enjoys. But given the trajectory on display in our audience, itself ahead of the curve, there is cause for concern for Microsoft.

Mobile, as the data indicates, is growing, quickly, and will produce winners and losers. And it is not a category in which any of the varied players can afford to lose.

Disclosure: Microsoft is a RedMonk client, while Apple (iOS) and Google (Android) are not.