A brief exchange on Twitter yesterday regarding developer operating system preferences seemed like an excellent opportunity to demonstrate how and where we’re trying to leverage data and RedMonk Analytics to provide quantitative insight on developer related questions. 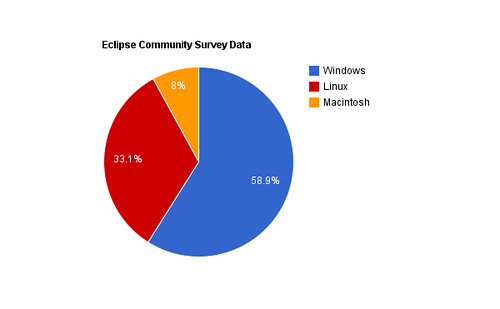 Windows is the easy winner, but Linux is as clearly second to Mac’s third. The primary takeaway for most is that Linux traction is strong amongst Eclipse users. The obvious next question is whether this trend holds amongst a wider development community or whether it’s a more localized Eclipse phenomenon. My hypothesis was that it was the latter; that we would instead see different trends amongst, for example, web developer communities. To test this, I decided to take an unscientific look at the raw data that powers RedMonk Analytics, but filtering it by subject to isolate individual community trends.

First, I decided to look at the metrics we’ve observed for Java specific content, to determine whether or not our data agreed with Eclipse’s. Here’s what we found: 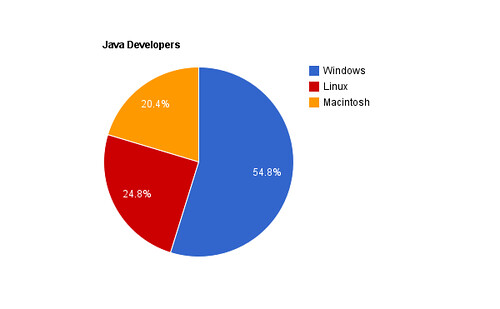 Generally, we agree. We observe the same rankings as Eclipse: Windows, Linux then Mac. The gap between the latter two is much narrower in our data, but the operating system distribution amongst those consuming Java specific content appear to be at least similar to what the Eclipse Foundation reported in its survey results. Which is perhaps not surprising, because while the Eclipse community is obviously broader and inclusive of more than just Java, by their survey numbers the majority – 69.5% – are still programming in that language.

But what about the non-Java developers in the audience? What about, for example, a more Javascript oriented audience?

Here is the operating system usage amongst visitors to this piece on Node.js. We believe that a Node.js audience should be considered substantially representative of Javascript more generally, for reasons such as this: 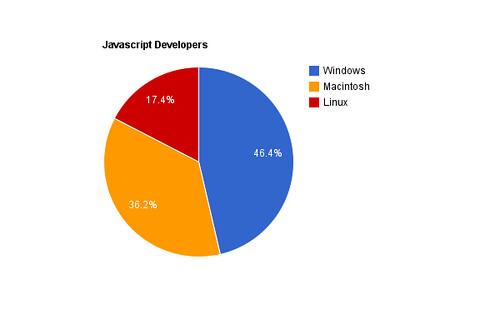 Assuming that Node.js is representative of Javascript, we can conclude that that community exhibits distinctly different operating system preferences. Mac is significantly more popular amongst Javascript developers than amongst Java developers, with its popularity coming at the expense of both Windows and Linux.

Similar trends can be seen in viewing the operating system preferences of visitors to PHP related content and projects. Here are the aggregated metrics from multiple PHP oriented pieces: 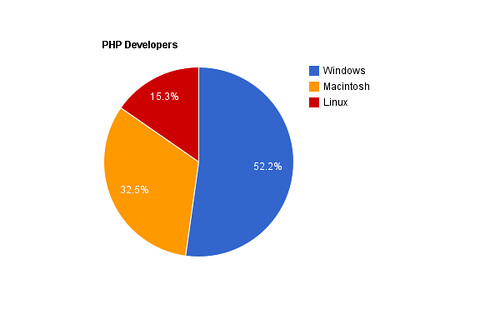 Windows appears to be more popular with PHP developers than their Javascript oriented counterparts, but the basic adoption pattern holds: Windows and Mac are both more popular than Linux.

Evaluating the above, we have some evidence to suggest that our original hypothesis may be correct: that operating system preferences amongst web developers differ in a statistically significant way from that of Java developers. There are obvious caveats to the analysis: undoubtedly there is overlap between the developers, for example. And while the sample sizes in each case consist of thousands of pageviews, we would need a wider, more comprehensive view of our content to make more definitive statements.

But hopefully this is, at a minimum, an interesting additional datapoint to discussions of what operating systems devs are using as well as a preview of the kinds of questions we’ll be answering with RedMonk Analytics. Does this make you curious about other developer related questions? Sign up for a demo of the product here.