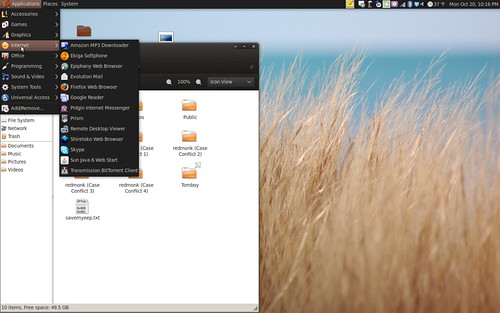 A quick update for the surprising – shocking, even – number of people that stop by this space looking for details on my experiences running Ubuntu on Thinkpads. The subject of this particular note is the Thinkpad X301, a marvelous piece of hardware (for the most part). Since I last checked in, there’s been news. So let’s get right to it.

I haven’t tested the machine completely, with appropriately dimmed displays to extend the life, but with at or near full brightness from the display, I’m getting a bit over four hours runtime with the dual battery configuration. That is, frankly, a bit disappointing, though I’m not sure whether to blame the battery technology or the software managing it.

Last time, I was recommending against running Ubuntu Intrepid (or other bleeding edge distros), because of this terrifying, hardware eating bug. I’m happy to report that the folks upstream have satisfactorily addressed the situation, and that you should feel free – indeed, I actively encourage it – to run Intrepid.

With the commit of a fix for the e1000e bug, I’ve subsequently upgrade my machine from Hardy to Intrepid. Not only has my ethernet firmware not been corrupted, the 2.6.27 kernel present in Intrepid has native Intel 5100 support, so wifi now works out of the box. Which is nice, because it saves you from having to reapply the compiled modules every time the stock kernel is updated. There’s nothing really groundbreaking in Intrepid in terms of the UI, except for the updating of Network Manager to recognize and actually preconfigure certain 3G WWAN cards. I still don’t have the on board Ericsson card working, but others do, as I’ll get to in a minute.

This is the single biggest concern with the machine currently, and it has nothing to do with Linux. As nearly as I can determine, the hardware fan in my machine is damaged and should be replaced. How it was damaged is unclear, because the machine certainly has not been so much as tapped, and I have done nothing to alter the preset fan speed or trigger points. And yet the fan is both helicopter loud on startup, and prone to clicking and grinding noises I’ve never heard in a Thinkpad. The only conclusion I can come to is that the fan was defective on arrival, meaning that I’m going to have to – at some point – get it replaced under warranty. But how I do this with an onsite visit – I don’t want to lose my machine while it’s shipped back and forth to a service facility – is still undetermined. Assuming that I’m correct, that this is a defect, this would be the first hardware issue I’ve ever had in a Thinkpad. Which is unfortunate, because no one wants busted hardware, but simultaneously impressive, because I’ve had quite a few Thinkpads.

As I wrote originally, I’m pleased for any number of reasons to have an SSD in this machine, but I recommend that those of you buying X301’s read Val Henson’s opinion of them, because it’s enlightening. There aren’t many people alive that know more about filesystems than Val, so if she’s worried, I’m worried.

The only software issue that’s emerged post Hardy is suspend. At present, it’s flaky and often locks up on resume. This has only recently become the case, however; suspend worked adequately on the initial install of Intrepid, and has only broken through subsequent updates. As a result, it seems reasonable to guess that this is a consequence of the Intrepid development process, but we’ll have to see.

For those of you looking for a laptop sleeve for your X301 (or X300, as the dimensions are identical), I can recommend the Incase CL57077 Neoprene Sleeve. Designed for the MacBook Air or 13″ MacBook, it fits the X301 beautifully. And for $35, it’s not going to break the bank.

I’ve gotten a bunch of questions regarding the theme pictured above and in other screenshots, and a few people have guessed, it’s Ubuntu Dust. It’s not quite perfect, but I’m a big fan: I even installed the matching Firefox theme.

Update: This one’s been solved: see the instructions here.

Here’s the progress I’ve made thus far: using the cu -l /dev/ttyACM0 command, I can successfully activate the Ericsson F3507g – as confirmed by the WWAN LED activation – and communicate with the device. What I cannot do – yet – is connect it to the network. While there exists a kernel patch for the F3507g, it is apparently not required to communicate with the card, as I have not patched my kernel at all. One of the users in this thread has his card successfully connecting to a Mobilkom Austria network, while Bob Lees left a comment on the original entry recommending the usage of at+cfun=1 and umtsmon to control the device. Please note, however, that both of those solutions require the usage of a PIN code for the SIM device, which I do not have, but more importantly entering the incorrect SIM code three times will lock your WWAN card, rendering it inoperable. So PLEASE be careful. I’m told that the default PIN code for Cingular SIMs was 1234, but I have not been able to confirm this, and until I can, I’m going to be cautious about experimenting with the card.