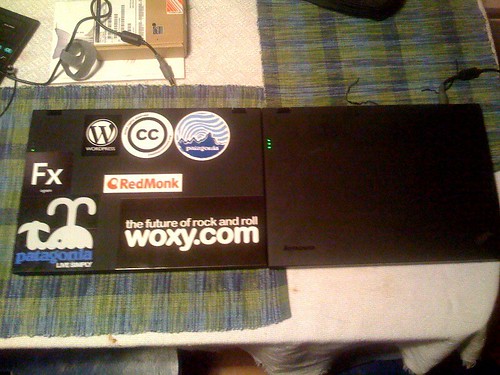 For the first time in nearly four years, I have a new laptop. It’s the one with the stickers on it. Feel free to send more of those, incidentally.

After being patient and not purchasing an X61s last summer to replace my aging and beat up X40 (only a 40 GB hard drive, if you can believe that), as was originally planned, I’ve got a brand new machine with everything I could want. 128 GB SSD, 13.3″ 1440×900 LED backlit screen, dual batteries and so on in a package that weighs slightly more than three pounds (with the extra battery, otherwise ~3).

To be honest, it’s probably not in my self-interest to review this machine. The folks from Lenovo have historically been very generous with loaner machines in return for detailed reviews and feedback; what if they were to discover that I’d do these reviews anyway? But several of you have asked about the machine, and I live but to serve. So this one’s for you; let’s just keep it on the down low.

I don’t have much feedback on Windows as I ran it for less than 24 hours all told, but Vista seemed to run without much effort. At no point, did it drag or hang, except when coming back from suspend. Boot time, however, was slow, even with the SSD.

Ok, this is what a high percentage of you people probably came here for. Herewith, then, the Linux on X301 report. One very important note before I get there, however.

For my distribution, I chose Ubuntu Hardy. Many of you will be doubtless be tempted to run Intrepid, or OpenSuSE 11.1, or something similarly new and cutting edge. I highly recommend that you not do this. Should you ignore that advice, you may risk damaging your ethernet card permanently, which – seeing as it’s integrated into the motherboard – is suboptimal. This bug describes the problem; basically, a rogue driver may overwrite the firmware of the device, rendering it inoperable. Worse, the tools that Intel provides to repair it (IABUTIL.EXE), will only worsen the problem by making the device invisible to the PCI bus. In case it’s not obvious, the fix for this is sending your laptop to Lenovo for a motherboard replacement. Seriously.

If you decide to proceed with Intrepid knowing this, I would follow the advice Chris Jones gave me, which is to hide your LAN chip from the OS by deactivating it in the BIOS.

But until that bug is fixed, I recommend you do what I did and stick with Hardy. Everything will work, with three exceptions – two important and one trivial – which I’ll get to.

On to the breakdown:

Pretty much everything. Unlike the X300, sound works out of the box (if you experience any problems, go to System:Preferences:Sound and turn off autodetect, picking ALSA instead). The display is picked up correctly, ethernet works, suspend works, as does Bluetooth and the Thinkpad keys (volume up/down/mute and the keyboard light).

As mentioned above, GNOME Power sees both batteries, and drains them serially with no issues (like a loss of power) whatsoever. It cannot, however, provide an estimated runtime based on the capacity of both batteries as could (if very imperfectly) Vista. As nearly as I can determine, it will estimate the runtime for each battery individually. This may be less of an issue once I’ve had the laptop longer and know better what to expect, but for now this is less than ideal.

Also not working under either Linux or Windows is the BIOS setting to power USB devices while the machine is in low power states; a minor trifle, perhaps, but it would be nice to be able to charge my iPhone while the machine was suspended.

One other item of interest: while I don't recall it being mentioned at purchase time, the BIOS mentions a WIMAX radio. Whether or not it's on board is undetermined as yet, but it's something to watch for.