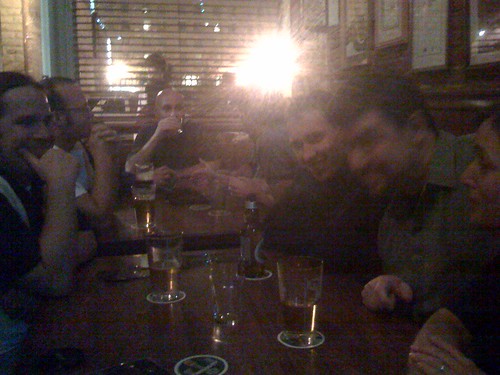 It just dawned on me that I hadn’t done the official OSCON wrapup. Probably because I had to sprint out of my Friday morning panel in order to sit on planes for, oh, about eight or nine hours before landing in Boston at near three in the morning Friday. Er, Saturday. Which left me a bit bleary eyed for my cousin’s Saturday wedding way the hell down the cape. But there you go.

Every year, at least as far back as I can recall, I’m asked what the theme, buzz pick your term of choice is for the annual open source gathering. While previous iterations have had specific flavors to them, this year’s defied easy categorization.

Which should not be read, please note, as an indictment. It’s a good thing, at least in my view, that OSCON featured conversations on everything from bad behavior to XMPP. Because open source is more than licenses and infrastructure code now. Truth be told, it always was, but the collective conscious learns slowly, in my experience.

In some respects, OSCON probably reflects the maturation process of the movement it’s built around. When I spoke at OSCON two summers ago, I told the audience of open source developers that they’d won. Where won = crossed the chasm. I think that assertion was correct, and I think this year’s edition was a downstream reflection of that.

The religion is not hard to find, still, but neither is discussion. Barriers between previously warring camps are crumbling, and conversations happen every five minutes that would have been unthinkable a few years previous.

But like Web 2.0 and Soylent Green, OSCON is first and foremost for me about the people. Trying to explain it to some non-industry friends of mine this week, I didn’t mention the sessions, or the city, or the business, but the people. OSCON has become a de facto reunion for me these days, an opportunity to connect with some of the best and brightest folks in this industry. Folks that are good people.

Those kinds of opportunities are a rare thing these days, when the conference circuit is metastasizing every week. Every technology, it seems, now needs their own conference, in their own venue, in their own location. Which, candidly, is a drag.

There are conferences seemingly every week – hell, every day – at this point, but OSCON remains a constant for some people I see but rarely. Which makes it fun, even if the sessions weren’t fascinating. Which they, unfortunately and fortunately, are. Just look at the 2:35 slot for last Thursday, which featured the following sessions I wanted to attend:

And that was just the 2:35 slot, and the talks that interested me. Seriously. Good luck picking one out of that lineup. My dilemma was resolved only after realizing that the Open Source as a Liberal Art talk was being given by r0ml, who is a speaker of such ability that I’d listen to him read the phone book.

But it almost makes me wish that OSCON was held twice consecutively. Then I could take one week to attend sessions, and another to attend to the necessary conversations.

Actually, strike that. That’s an awful idea. I was so worn out by Thursday that I didn’t even go out, and if we did a longer OSCON there’s no guarantee Raible would survive. So the schedule is just fine as it is.

Instead I’ll just look forward to next year’s edition.

I’d also like to take the opportunity to thank some people:

Rob Lanphier, for conceiving of, organizing, and inviting me to sit on Friday’s panel, which I had fun with.

Tim O’Reilly, both for taking a few minutes out of what had to be a wall to wall schedule to chat, and also for his and O’Reilly’s support of RedMonk over the years. Honestly, when you read things like this, it feels like you’re doing something right.

Everyone that came to one of the RedMonk events at the Kells. I can’t remember everyone that attended (Smithwick’s was involved, remember), and I know I’m going to forget someone and piss them off, but the partial list includes: Dalibor Topic, Dave Neary, Deborah Macartney, Donnie, Glynn Foster, Joe Hildebrand, Peter St-Andre, Sara Dornsife (for like five minutes), Stephe Walli, Ted Leung, and Tim Bray. It’s great to see that folks had a good time, and we remain profoundly grateful for the continued support we enjoy from our community. You folks are the best.

Lastly, check out this sign that Sara spotted. It’s a real classic.