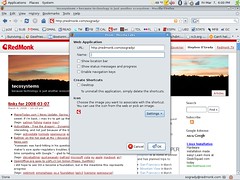 Tough week for the planned posts. One on Lotus is bogged down, another on the iPhone got derailed by the SDK announcement this week, and two more – screencasts both – are in a holding pattern until I can get into the office. Which in turn will have to wait until I’m no longer a vector for whichever cold or flu virus has chosen to infect me this week.

But I certainly have no intention of leaving you to your weekend without something. Hence this grab bag.

If it’s got a distinctly Mozilla-ish theme to it, you can blame that on Christopher Blizzard, who was kind enough to join Cote and I this week on our open source podcast (mp3) to talk Mozilla, Firefox, Weave and more.

Speaking of the podcast, the subject of the iPhone and its Webkit based browser did indeed come up, and I sheepishly admitted to being happy with the device in spite of my one time intention not to own one. What’s been particularly interesting to me have been the reactions to the SDK for the platform. Some were initially impressed but then let down, some are convinced that it represents the beginning of two decades (!) of Apple mobile dominance, and others still believe that the closed nature of the ecosystem will hold it back.

While I lean towards the view that Apple’s gatekeeper role will limit the number of applications (Ars has some interesting pushback on that idea, however) even as I’m eagerly anticipating expanding the capabilities of my phone as a user, I think Rafe is ultimately the one who gets it right.

It’s a lot easier to surrender control than it is to reassert control once surrendered. It seems to me that Apple is being very conservative with the iPhone, but at the same time, that they’re listening to customers and relinquishing control at their own pace.

I don’t think it’s particularly arguable that an application portfolio throttled by a single point of control will be smaller than one that is not, but nor is it reasonable to assume that Apple will maintain that control indefinitely.

That’s one of the reasons that competition is good: if Android can deliver on a fraction of its hype, I suspect that Apple ultimately will be compelled to loosen the reins a bit to ensure it remains competitive.

While I’ll reserve my more extensive thoughts on the subject for the Sox blog, I did want to take the opportunity to commemorate the 10th anniversary of Pedro’s first spring training start in a Red Sox uniform, which was yesterday.

I have never seen anyone pitch better than he did in 1999 and 2000, nor do I expect to again in this lifetime. There are a very few players who’s peaks are so transcedent that they merit induction into the Hall of Fame solely on the basis of what they accomplished over the course of a few seasons, but Pedro is one of them.

It was my privilege to watch him perform wearing a Sox uniform, and one that I tried not to take for granted. Best of luck to him and the Mets this season.

If you follow Rich Internet Applications, the latest Prism rev is one that you’ll want to check out. Among other functions, it allows users to turn the web sites within Firefox into applications with the click of a button, rather than waiting for the authors to create an RIA for it. So if GMail doesn’t follow Zimbra’s lead, you can simply create an application on your own.

I’ll be playing with this over the weekend and should have more for you shortly.

Speaking of plugins, I’ve written before of the catch to the approach: namely that misbehaving extensions can confer an unwanted reputation for instability on the platforms they’re built on and for. It is that specific problem within Firefox, in fact, that makes this work by some students at Seneca College in Toronto so important. Thanks to Mark Finkle for bringing it to my attention.

Yes, another Mozilla post: this time it’s Weave. I’d run across this extension/service back in December, but wasn’t running the needed Firefox 3 at the time and so had mostly forgotten about it. My original characterization was that the aims of the project were ambitious, but on Senor Blizzard’s recommendation from the podcast I’m now using Weave for something decidedly mundane: bookmark syncing across FF instances. I have no idea whether or not it will achieve some of its grander ambitions, but for the one thing I need it for it’s effective.