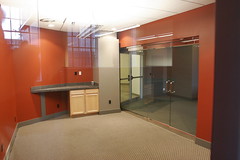 Conference room from hallway (through window)

Offices, that is. Tired of being outdone by James, who shares space with the cool kids from Dopplr, as of Monday morning I will have officially raised him one as I’ll be moving in with the Crowd Favorite wunderkinds. Yes, the same Crowd Favorite that built AllthingsD for Wall Mossberg and the Wall Street Journal, refreshed Crunchgear for the Tech Crunch gang, and developed the Shortcuts WordPress plugin for Yahoo. Not to mention our site and blogs. Needless to say, I’m pretty fired up.

A friend asked me at lunch today whether or not it I thought it would be difficult to transition back to an office situation, given that I’ve been working out of the house since I moved to Denver. The answer is no, for five reasons:

Not a bad setup, I think we can all agree. I don’t anticipate any external changes as a result of the move – phone, etc – but I’ll keep you posted just in case.

Alex has pictures up of the new digs, in case you’re curious.

Cote, James and myself talked it over today, and the destination for our 5th Birthday Party is going to be…you guessed it, the House of Shields. There are many things that make it a good choice – convenient location, the lack of ambient light, or my favorite, cost – but ultimately it was as simple as admitting to ourselves that the House of Shields is the RedMonk bar, and that heading somewhere else would feel wrong. So we look forward to seeing you all in a few short weeks for the best night San Francisco has seen since the last time we took over the joint.

First, what is true: I did pick up a Mac Mini this afternoon. Now, what isn’t true: I am not turning to the dark side. This decision, in fact, is a signal that the replacement for my current laptop is unlikely to be a Mac. Rather than a genuine “switch,” which would potentially disappoint Mark Pilgrim, this acquisition was prompted by the accelerating stream of products I need to test that are Mac based. Not having ready access to an OS X interface was proving to be a problem, and the Mini is the intended solution to that problem. As I mentioned on Twitter, first out of the gate is likely to be a look at both Fusion and Parallels, but suggestions for a new Mac user in the meantime would be appreciated.

While I remain convinced that blogs should be a reasonably faithful representation of an individual, even the parts of them you may less than interested in, the mostly good natured grumbling that followed my Sox coverage during the World Series pushed me to do something I have long avoided. Back in November, you may recall, I promised that I would be shifting a portion of the Red Sox related coverage over to a new property to be launched in January. Well, it’s January, so here it is (feed here). Though you can’t blame him for the design – that’s my fault – you can thank (or curse) Corey Gilmore for figuring out one of the weirder Apache config problems I’ve seen. Thanks are also due Glen for his GIMP tutoring efforts; any failures are, of course, mine alone.

Before you get too excited, let me state upfront that tecosystems will never be entirely devoid of baseball, whether it’s the occasional post or the regular del.icio.us links that would be problematic to filter, but from this point forward it should be more infrequent. The first post over there – which was obviously going to be a Q&A – explains a little bit about what to expect, but in the meantime, this one’s for the folks that were a bit unhappy with all the sports.