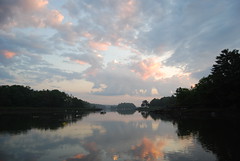 Colors Relecting on the Water

With a full day on the water yesterday yielding nothing but a Red Sox win (good) and a boiled lobster skin hue (bad), the time had come for dramatic action. Getting shut out on striper in May is one thing, as the lazy fish are still straggling up the coast from North Carolina and Maryland. Getting shut out in mid June is quite another. The time, I reluctantly conceded, had come for dramatic action. A 4 AM wakeup. A voluntary 4 AM wakeup, more specifically. It worked like a charm, after all, last year.

When I trudged down to the dock this morning at half past four, still fogged enough with sleep that I had to make a return trip for my fly case, it seemed as if my scoreless streak would soon be at an end. Although I learned yesterday that the reason that I’ve never been able to land the large stripers that breach spectacularly around the boat over the summer months is because they’re not actually stripers, but sturgeon, the scene laid out before me couldn’t have been any more perfect. The water was practically boiling with my target species, with visible rises all around me.

What they were rising at, I couldn’t tell. No visible bait species crowded the shallows. But no matter, as I already had on a popper. Half a dozen casts in, I was a bit perplexed. At a dozen, irked. Two, frustrated. Time to switch flies; no striper can refuse something chartreuse, after all. It’s just not in their nature. Two dozen casts with the deceiver was probably half a dozen more than I needed to dispell that notion. Foam popper? Nothing. Olive/white half and half? Zippo. Gray/yellow/green baitfish pattern? Nope. White/silver clauser? Nada.

For not the first time in my fishing career, I seriously contemplated taking up spin fishing. Even – gasp – bait fishing. Just as quickly, I tossed that notion out. Sticking to fly fishing, after all, affords me the same out my wooden golf clubs do: any failure on my part can be redirected towards the equipment.

Despite the fact that I’m still 0 for the summer, however, the morning was far from a total loss. As you can see from Flickr, after my failed fishing endeavours, I turned the new camera on the very still scenery that was illuminated by the rising sun. The poor results in this case regrettably cannot be blamed on the equipment, as the D40x my parents and brother jointly gave me is both brand new and the owner of a 10+ megapixel resolution. Not to mention a whole mess of features I’m still struggling to understand. But while the results undoubtedly undersell the capabilities of the gear, I remain pleased with the set, if not the early morning wakeup.

Besides, my fishing streak – like the current Red Sox offensive doldrums – has to end someday, and someday soon. Or so I told myself as I drifted back to sleep a bit after six.