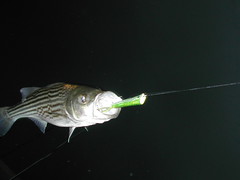 Last Fish of the Morning

As it turned out, the transformer explosion across the street at 4:30 this morning was a good thing. While I admit to being blearily apprehensive when awoken by something that sounded like an M80 going off, and looked out to see shooting sparks and more loud popping noises from the power lines right next door, I recovered quickly enough to realize that I should take advantage of the opportunity.

Not to call Central Maine Power; they were there within 10 or 15 minutes anyhow and seemed to have the situation in hand. But rather to seize the chance to get out and get some early morning fishing in. Yes it was pouring rain, yes the black flies were ferocious, but how many times am I going to be up at 4:30 in the morning? Not many. Or so I thought until I started fishing.

You may remember that I caught my first striper last summer under similar early morning conditions, but that was nothing like what awaited me today.

I’d left the line rigged last night with some weird green foamish popper fly I’d picked up at the Kennebec Angler last night, the last of three different flies I’d tried with no success from about 7 to 8. So this morning around fivish I hit the dock and dropped this weird looking thing about 25 feet out and instantly had a rise, and then another. Nothing hooked. Two casts later, however, I had my first fish of the morning. Three casts after that, my second. Then I started seeing white flashes under the fly as I drew it back, indicating that they had wised up.

So I cut over to the same baitfish popper I used to catch one the other day. Snagged one almost immediately, and then another sizable fish that broke the line off before I could land him taking my fly with him (second one I’ve lost in three days). Put on an olive and white clauser as recommended to me initially, and wouldn’t you know it – they liked that too. Picked up another good sized fish on that one, and then realized that I still had no photographic evidence of a single fish yet this summer.

Needing some proof to forestall the skepticism of a friend back in Colorado, I hopped back up to the cottage, and grabbed the camera. I caught this last fish – which was by far the smallest of the bunch, I promise – and then hooked a mooring. Trying to retrieve my fly, I snapped off the leader leaving me with about two feet. Not enough to fish with, even on a morning like this.

But lesson learned: if you want to catch striper in Maine, in June, it can be done at any time during the day, but it’s never easier than at 5 in the morning (unfortunately). Looks like I’m going to have to suck it up and get up early a couple of days a week now.

On a totally unrelated note, the few pictures I took during my recent roadtrip are now up here.