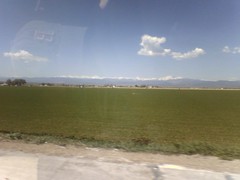 When I fell out of bed at the crack of dawn this morning (read: 7:30 AM), I had no real way of knowing that by noon I would have a.) caught only one fish in four hours, b.) almost stepped on a (poisonous?) snake, and c.) punched a pencil sized hole in the side of my foot. Ok, maybe I could have guessed at the lack of success. Well, maybe the snake. And I suppose my track record for fishing injuries is such that the foot thing could have been predicted. Fine, be that way.

Anyway, onlineclock.net (thanks, Simon) being kind enough to wake me at that unholy pre-8 AM hour, I was actually out in front of my building at 8 sharp as previously agreed upon – which happened to be five minutes before my friend picked me up on the way up to Loveland (I-25 North, off at the Loveland exit, left off the highway, 2 miles or so down, right at the trailers, ponds are off to your left). Which of course was irritating, as those were five more minutes I could have been sleeping.

Fortunately, said irritation was easily kept in check by a steady series of infant related anecdotes – my friend is the parent of a 1 and a half year old – and frankly, it was too nice a day to hold a grudge. Even if it was pushing 90. Which it was.

The ponds, much to our dismay, were a bit turbid, meaning difficult to fish. Twenty minutes in, having caught approximately nothing – with the exception of the smallest fish I’ve ever seen, caught not by me – we were forced to resort to “droppers” – essentially a fly tied onto another fly. The theory behind these is that when a fish takes the dropped fly – the one tied on – it moves the first fly, much as a bobber works in spin fishing, making it easier to set the hook and land the fish. The downside is that you’re more likely to foul your cast, particularly if your technique is less than perfect. As mine is.

This worked like a charm for my friend, who hauled in 10 or more fish in a half hour span, but 10% as well for me. But my lack of success was a small price to pay for spending the morning under a bright blue sky, wading through cool water, and heckling my buddy for catching nothing but water rats (AKA bluegill).

It was after a relative dry spell on both of our parts that we decided to circle around to the far side of the pond, at which point I almost put my foot down on this guy. If I knew more about snakes than I do about earnings announcements, I’d be able to tell you whether or not it was poisonous, but I don’t. Nature has its way of warning you, however, and although the color is leached out of the linked shot the snake was red. I had trouble with colors in kindergarten but even I know that usually doesn’t bode well.

Easing around the snake, the two of us fished the back ponds for an hour or so, until my brother called me as I was wading through the shallows of one reed filled pond. He was, it turns out, gloating from his seat three rows back of the Yankee dugout at Yankees stadium, ready for the start of today’s Yanks/Sox game (which I’ve kept my Dad apprised of via his Blackberry). Some choice words were involved in that particular conversation. Right after dropping my the phone back into my fishing vest, I felt a slight pain in my right foot, which apparently compelled my brain to crank out a low pitched bark of some sort.

Looking up, my buddy asked me what the problem was. Looking down, I said “there’s something sticking out of my foot.” As it turned out, it was an oversized thorn, about the thickness of a number two pencil at its base. Realizing that it didn’t belong there, sticking perpendicularly out of my foot where the big toe joins it, I removed the thorn easily, at which point blood sought to fill the void. And then some, filling up the bottom of my flip-flop. The problem wasn’t, of course, the wound (it’s pretty blurry, so not too gross) itself. It wasn’t even a flesh wound, as such things go, and my poor dogs are used to serving a secondary role as pincushions. The problem was – and probably still is – infection. While I washed it out in a restaurant bathroom on the way home, and got some antibiotics on it once I returned to the apartment, there’s no guarantee that I won’t wake up from my upcoming nap with a watermelon sized foot.

Even should that unfortunate circumstance come to pass, however, today is guaranteed to be a good day. Check that, a great day. Why, you ask? Amalie Benjamin is presumably only too happy to explain it to you. And if you’re link averse, the reflection in the inset photo is your clue.

On an entirely unrelated note, I’ve been enjoying Greg Laswell’s new album. The title is one for Ryan – Through Toledo. His WOXY.com Lounge Session gives you a chance to listen to a couple of my favorites – “”Do What I Can” and “Sing, Theresa Says” – not to mention hear the artist himself (sounds like a great guy). It’s nothing terribly groundbreaking or avant garde, but good solid songwriting and some creative use of the violin to compliment otherwise typical indie rock. If you like Laswell (or M. Ward), I also suggest giving a listen to Andrew Bird. Skip “Fiery Crash,” which isn’t bad but is what everyone plays, and try “Armchairs,” “Plasticities,” or my personal favorite, “Scythian Empires.”