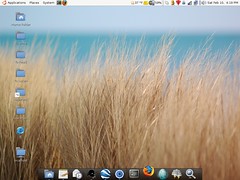 With yesterday being a rather unpleasant day in the technical sense, I decided to take a bit of time yesterday evening and this morning to try and update things a little to make them, well, more pleasant. First on the list was getting this little bit of eye candy – Avant Window Manager Navigator (AWN) – up and running. Pointed over there by Jeff, I was a bit skeptical if only because a.) I’m no great fan of the OS X user interface, as many of you know, and b.) I recently tried – and discarded – a similarly significant radical rethinking of the UI, Gimmie.

AWN itself depends on the technologies powering the next generation Linux user interfaces: XGL or AIGLX for the X server, along with Compiz or its community fork, Beryl, for the compositing Window Manager. You may remember the Xgl technologies from my battling to get it to work, my eventual modest success, and the subsequent unfortunate but necessary hard reset which left my hard drive corrupted. There’s a bit of backstory here, in other words, and little of it has been good. That’s the bad news.

The good news, I’m delighted to report, is that installing AIGLX/Beryl these days is simple, even trivial. Here’s the HowTo I used successfully to get Beryl built and running. As long as you don’t run the blur effect, which is a big throttle on performance, the interface is at least as snappy as the regular X/Metacity combination. I’m still working through the new hotkeys and bindings, as well as which visual effects are useful (scale) versus those that are more superfluous (wobbly windows), but overall I’m quite pleased with Beryl. Even better, it’s resumed successfully from suspend (when the machine itself comes back, anyway, but more on that later) – it used to hang on returning from ACPI suspend. This is a must have on the laptop.

That accomplished, I turned to the job of getting AWN up. I almost gave up first when the Ubuntu packages didn’t install properly (they’re now fixed, apparently), and then when an install from the Subversion code failed on account of some missing dependencies (the missing -dev versions of libgnome, etc). But ultimately, I got it to build by installing a variety of missing packages, and have been running it since.

Interestingly, I find it significantly preferable to the old, static bottom menu bar. It’s interesting not solely because I’ve never been a huge fan of Apple’s dock – of which this is clearly derivative, but because I don’t adapt to change on my desktop well. There are minor annoyances, of course, such as when it obscures text at the bottom of the screen (it doesn’t autohide like the dock). But it’s alpha software, so those are to be expected.

Overall, this is the first significant alteration I’ve made to my GNOME desktop that is likely to remain. I’m quite fond of AWN, and really appreciate all of the hard work Neil Patel‘s put into the project. This is a great reminder of why I love running Linux on my desktop: there are (frequent) growing pains, but I get to build the kind of desktop that I want (dock, but no integrated top menu) – not what Apple or Microsoft would build for me. I’m sure that’s not true of everyone, but it’s still true of me. So thanks Neil, and thanks also to the folks behind AIGLX, Beryl and GNOME projects that make all this work. You’ve got at least one happy user.