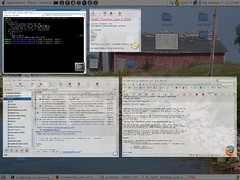 Well, I’m not going to win any awards for first place, but I did eventually manage to get Xgl up and running on my machine. As Alex says, Xgl is quite the rage these days and even though it’s not fully functional on my hardware (Intel i810), it’s easy to see why.

While I don’t think Linux is giving much up to Windows XP in terms of look and feel at this point, it clearly has lagged considerably behind the eye candy heavy OS X. I don’t know that Xgl by itself closes that gap, but you could at least begin to make the argument. Bendable, dockable application windows, OS X expose type functionality, even the ability to turn your desktop into a cube – all of these are made possible by the technology that Novell developed behind closed doors and has subsequently unleashed on the community as an open source project.

Speaking of the community, there’s very little chance that I would have gotten Xgl up and running without the assistance of the incomparable Gentoo community (thanks to Donnie in particular). Following our standardization on Ubuntu at the server level, a couple of people have asked me why I don’t switch on the desktop level as well, and my answer is twofold: one, I prefer Portage to apt-get (sorry, Debian/Ubuntu folks), and two, the community.

The good news on the latter point is that my first experience with the broader Ubuntu community has been very positive. As an aside, I wonder what the reaction to that question would have been from the Debian folks?

As for Xgl, the question now is: will I keep it? The answer to that is probably no, at least for the near future. It’s a bit slow, though not unusably so (and work is apparently being done on the i810 driver to make it more compatible), and I can’t use all of the plugins (cube and switcher, in particular, still aren’t working for me) – but the bigger problem is reliability.

Because my laptop doesn’t have a built-in CD-ROM, I can’t afford to screw my machine up to the point that it needs a rescue disk while travelling, and I almost did that on the flight down to Orlando on Monday. There were a couple of tense moments when I thought I’d permanently turned my desktop into a massive blue cube (don’t enable Metacity with composite extensions when Xgl is running – just trust me on this), although ultimately I was able to kill X and back everything out.

Xgl is definitely the real deal, however – it’s not just hype. If you’ve got better graphics hardware than I do, I highly recommend giving it a look. You could even try it without installing Linux – try one of the live discs from Kororaa. Enjoy.