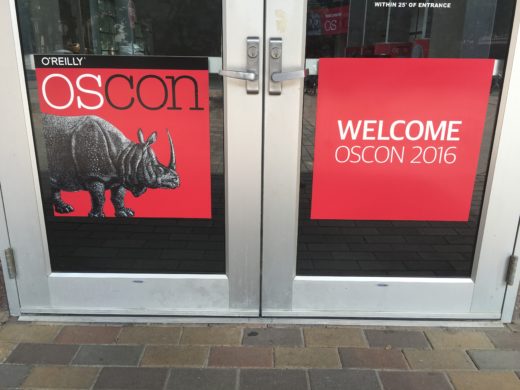 Last week in New York, the venture firm Accel held a ninety minute lunch for an audience of financial analysts and equity professionals, a reporter or two and at least a few industry analysts. The ostensible subject for the event was Accel’s Open Adoption Software (OAS) model, but the wider focus was what the future held for open source in general. Accel’s view on this subject, as well as that of the panelists at the event from Cloudera, Cockroach Labs and Sysdig, was that open source essentially has gone mainstream. As Jake Flomenberg, an Accel partner put it, “There is a massive shift going on in the ways technology is bought. Open source has gone from the exception to the rule.”

Setting the OAS model to the side for the time being, the larger message that open source has become the default choice in a wide array of infrastructure software categories isn’t difficult to sell. It is a message that was consistent with attendee sentiment at the most recent OSCON in Austin, the ApacheCon in Vancouver, and the Linux Foundation’s Collaboration Summit in Lake Tahoe before that. It is a message that Cloudera’s Mike Olson would presumably agree with; in 2013 in a piece entitled “The Cloudera Model,” he said simply, “you can no longer win with a closed-source platform.”

The idea that open source has effectively won within the enterprise is also consistent with RedMonk’s own views on open source. The only real difference is that this perspective, for my part, is better used to describe open source’s past than its future.

At the 2005 O’Reilly Open Source Conference, for example, I gave a keynote to the room full of developers entitled “so you took over the enterprise: what now?” Open source was not yet as common within the enterprise eleven years ago as it is today, but from our vantage point it had passed the tipping point, and its trajectory was assured. The decade since giving that presentation has done nothing but validate that original assertion, as open source projects and efforts to commercialize same have entered market after market, category after category, to the point where there are frequently more open source options available today than proprietary alternatives.

All of which has led to open source advocates taking a deserved bow for their success. It was by no means assured; certainly in the early days of RedMonk, there was major skepticism about the model in general, from its ability to sustain itself commercially to its vulnerability to everything from intellectual property violations to security exploits.

But just as open source is finally being recognized as the viable model we always believed it to be, it is facing competition that enjoys some of the same advantages over open source that open source had relative to proprietary software.

That competition is the cloud.

Competition is an interesting term to use, to be sure, because the cloud is built for the most part from open source software, and the cloud is such an important channel that it has elevated open source projects such as Ubuntu to first class citizen status. The presentation that Accel gave didn’t mention the cloud as a competitive threat, and the competition most frequently discussed by both Accel and its open source participants was proprietary software companies.

But if we step back, public market activity suggests that more concern is warranted. We know, for example, that Oracle, one of the standard bearers for proprietary software, derives less of its revenue from the sale of new software licenses every year. We also know that Amazon Web Services, which conflates open source, proprietary software and hardware, is growing quickly. Correlation may not prove causation, but it’s difficult to build the case that these two facts are unrelated.

Consider some of the differences in user experience when comparing cloud services to traditional on premise open source alternatives.

It’s important to differentiate, of course, between the outlook for open source and commercial open source. The prospects for the former remain reasonable, as it remains a fundamentally more viable methodology for most classes of software. The rise of the cloud may even accelerate the availability of certain classes of open source software, either because its authors are not in the business of selling software (e.g. Facebook/Cassandra or Twitter/Heron) or because commercial vendors seek to reduce customer fear of lock-in via public cloud implementations of OSS (e.g. Cloud Foundry, MySQL).

For commercial open source vendors, however, it is important to recognize that the cloud is at least as much threat as opportunity. Many of our commercial open source customers, whose primary business is selling to enterprises, have acknowledged this, and are ramping into the public cloud as quickly as they can. This rapid flight is creating strange bedfellows, in fact: several open source vendors admitted at OSCON that the best cloud partner in their experience was Microsoft – an interesting turn of events for someone who remembers that Jason Matusow needed security for his first appearance at the conference, so hated was the vendor at the time.

Does the cloud represent opportunity for open source as well? Undoubtedly. But the future outlook for open source, particularly those who would commercialize it, seems counterintuitively far more murky today than it was in 2005. Open source is rightly being heralded as the default, and having “won.” The difficulty is that in this industry, victories tend to be very short lived.

Open source has learned how to compete, and compete very effectively, with closed source. That’s its past. Its future will be competing with the public cloud, and the first step towards doing that effectively is admitting the problem.