Last Thursday at ten in the morning, this auditorium was full because I made a joke four years ago.

the funny thing is that i was mostly kidding about the beer/tech conference. based on the response, now i'm only sort of kidding.

Describing the Monktoberfest to someone who has never been is difficult. Should we focus on the content, where we prioritize talks about social and tech that don’t have a home at other shows but make you think? Or the logistics, where we try to build a conference that loses the things we don’t enjoy from other conferences? Or maybe the most important thing is the hallway track, which is another way of saying the people?

Whatever else it may be, the Monktoberfest is different. It’s different talks, in a different city, given and discussed by different people. Some of those people are developers with a year or two of experience. Others are founders and CEOs. People helping to decide the future of the internet. Those in business school to help build the businesses that will be run on top of it. Startups meeting with incumbents, cats and dogs living together. 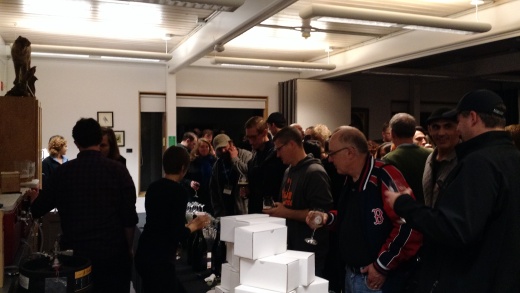 Which is, hopefully, what makes it as fun as it is professionally useful. It doesn’t hurt, of course, that the conference’s “second track” – my thanks to Alex King for the analogy – is craft beer.

During the day our attendees are asked to wrap their minds around complicated, nuanced and occasionally controversial issues. What are the social implications and ethics of running services at scale? When you cut through the hype, what does IoT mean for our lives and the way we play? Perhaps most importantly, how is our industry industry actually performing with respect to gender issues and diversity? And what can we, or what must we, do to improve that?

To assist with these deliberations, and to simultaneously expand horizons on what craft beer means, we turn lose two of the best beer people in the world, Leigh and Ryan Travers who run Stillwater Artisinal Ales’ flagship gastropub, Of Love and Regret, down in Baltimore. Whether we’re serving then the Double IPA that Beergraphs ranks as the best beer in the world, canned fresh three days before, or a 2010 Italian sour that was one of 60 bottles ever produced, we’re trying to deliver a fundamentally different and unique experience.

As always, we are not the ones to judge whether we succeeded in that endeavor, but the reactions were both humbling and gratifying.

Another great @monktoberfest. My mind and beer fridge are full! Thanks to @sogrady, the Redmonk team, volunteers, and sponsors.

Fantastic visit to @monktoberfest in Portland then family in Bath here in Maine. Will def be back pic.twitter.com/yXR2XDfGoO
— Josh Sanderson (@jdsboston) October 5, 2014

The one conference my husband wasn't that upset I went to @monktoberfest #speakergift #spoiled pic.twitter.com/VeXITGsKTI

Many thanks to @sogrady, @girltuesday, and everyone else for putting on a great @monktoberfest. Lots to think about.
— Chris Petrilli (@petrillic) October 4, 2014

@monktoberfest Thanks for the amazing time! A postcard to remember it with 🙂 pic.twitter.com/oKDdVlL223

Back home after an amazing #monktoberfest. Best one since the first one. Now enjoying a day and a half away from the airport.
— Donnie Berkholz (@dberkholz) October 4, 2014

Really late on this due to lack of battery but thanks to @sogrady, @girltuesday, @ofLoveandRegret and everyone else for @monktoberfest

Goodbye Portland and @monktoberfest. It has been real. Can't wait to next year and the surprises that are coming!!!
— Jeff Sloyer (@jsloyer) October 3, 2014

A huge thanks to the entire @monktoberfest crew! Again, another smashing success.

So long @monktoberfest, it was swell.
— Theo Schlossnagle (@postwait) October 3, 2014

Another #monktoberfest comes to a close – the best one yet. Well done @sogrady, @girltuesday, @JulianeLeary and the rest of the organisers.

Amazing trip to @monktoberfest – Great to meet both amazing new friends and so many old twitter friends in the flesh for the first time.

Aaaand, #monktoberfest wraps. Thanks to @sogrady, @monkchips, @dberkholz and the crew for tricking me into Portland again.

So lucky to be a part of the #monktoberfest community. Great group of folks with an amazing set of talents and knowledge. Just good people.

Incredible time at #Monktoberfest. Sad I had to leave early- early flight back to the Bay!
— Lucy Chen (@lucyatcal) October 3, 2014

I'm pretty sure if I started googling name tags I'd be all "Wow!" But instead I'm like "hey these are just people!" #monktoberfest

Thanks to the fine folks that were crazy enough to let me speak (and drink!) at #monktoberfest! Very special event; can't wait to return.
— mik3y (@mik3y) October 3, 2014

Dining under the stars with great people and food picks from @sogrady and @girltuesday. Best conference ever! Thank you! #monktoberfest

@monktoberfest don't know how you do it, but it gets *better* every year.. and every year it's the best event I go to! #monktoberfest
— Aneel (@aneel) October 2, 2014

Out of all of those reactions, however, it is ones like this that really get to us.

ditto “@nikiacosta: “only conference I pay for out of pocket and take time off work for is @monktoberfest.” —@aneel pic.twitter.com/Fqm5iy821R”
— Erik Dasque (@edasque) October 3, 2014

The fact that many of you will spend your vacation time and your own money to be with us for the Monktoberfest is, quite frankly, incredible. But it just speaks to the commitment that attendees have to make the event what it is. How many conference organizers, for example, are inundated with offers of help – even if it’s moving boxes – ahead of the show? How many are complimented by the catering staff, every year, that our group is one of the nicest and most friendly they have ever dealt with? How many have attendees that moved other scheduled events specifically so that they could attend the Monktoberfest?

This is our reality.

And as we say over and over, it is what makes all the blood, sweat and tears – and as any event organizer knows, there are always a lot of all three – worth it.

Those of you who were at dinner will have heard me say this already, but the majority of the credit for the Monktoberfest belongs elsewhere. My sincere thanks and appreciation to the following parties.

With that, this year’s Monktoberfest is a wrap. On behalf of myself, everyone who worked on the event, and RedMonk, I thank you for being a part of what we hope is a unique event on your schedule. We’ll get the video up as quickly as we can so you can share your favorite talks elsewhere.

For everyone who was with us, I owe you my sincere thanks. You are why we do this, and you are the Monktoberfest. Stay tuned for details about next year, as we’ve got some special things planned for our 5th anniversary, and in the meantime you might be interested in Thingmonk or the Monki Gras, RedMonk’s other two conferences, as well as the upcoming IoT at Scale conference we’re running with SAP in a few weeks.