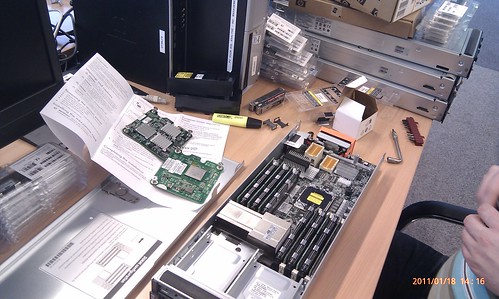 In December of 2004, Adam Bosworth wrote a seminal essay entitled “Where have all the good databases gone.” Anticipating by years the rise of the MapReduce/NoSQL movements, it succinctly identified the central problem: “The products that the database vendors were building had less and less to do with what the customers wanted.”

In the years since, it has become clear that databases are not the only software area challenged in this respect. For the first time since the rise of Microsoft, Oracle and other large software players, businesses of all shapes and sizes are beginning to turn not to vendors for technical solutions, but to their own staff, or the software products of other businesses released as open source software. The software industry, in other words, is in the process of being disrupted by its would be customers: we’re seeing the return of roll your own.

None of which is particularly surprising. As the constraints of available software and hardware are removed from developers by open source and the public cloud, respectively, their collective output goes up. With a growing subset of this output released as open source software by entities such as Facebook, LinkedIn or Twitter who see software as a means to an end rather than an end in and of itself, it begins to create a virtuous cycle: more high quality freely available software means less reinvention of the wheel, thus begetting more open source software.

What is surprising, however, is the degree to which hardware vendors are proving to be vulnerable to the same trend. This is counterintuitive given the perceived difference between authoring code and manufacturing hardware. Aside from the difference in upfront capital required, there is the fact that manufacturing at any reasonable scale has been considered a complicated exercise, one that ideally would be outsourced to specialty vendors (i.e. Dell, HP, IBM, etc).

One of the industry’s worst kept secrets, however, has been that Google’s servers are not products of these vendors but rather machines it designed itself. While acknowledging this fact, most hardware manufacturers have dismissed its importance as either a quirk of Google’s culture or a problem unique to the only business in the world operating at that scale. In other words, Google’s roll-your-own was the exception, not the rule.

And for the most part, industry analysts tracking the hardware market implicitly validated these claims, because their numbers reflected minimal competition for traditional hardware suppliers. But as discussed in a 2011 Wired article by Bob McMillan, it was clear that the picture painted by the analyst reports was at best incomplete, because it was significantly under-reporting traction from Original Device Manufacturers (ODMs). As Andy Bechtolsheim (who co-founded Sun in 1982) put it,

“It’s hard to get those numbers because they’re not reported to IDC or any of the market firms that count servers.”

If the ODM numbers were inaccurate, then, what did the server market look like in reality? One hint arrived a year later, when Intel indirectly crowned Google as the world’s fifth largest server manufacturer. By itself, this was interesting, but could still be dismissed as an isolated trend.

Recent events, however, call that into question. Rackspace, an environment that has historically been 60% Dell and 40% HP will be in April, according to CTO John Engates:

“Basically back to our own designs because it really doesn’t make a lot of sense to put cloud customers on enterprise gear. Clouds are different animals – they are architected and built differently, customers have different expectations, and the competition is doing different things.”

While it’s true, then, that the initial customers for roll-your-own gear remain large entities like Facebook, Google or Rackspace, it is likely just a matter of time until the ODM manufacturers of the customized gear such as Quanta begin to target enterprises directly. And as for the much larger market of businesses that lack the need or wherewithal to build and design their own servers, an increasing number of them will be running on the custom ODM manufactured gear anyway in the form of public clouds.

The impacts of this shift, once so easily dismissed, are evident already. Dell is attempting to go private to retool its business away from the harsh scrutiny of public markets. VMware is attempting to enlist – among others – service providers built on Dell, HP and other major label hardware in a war on Amazon. The percentage of both revenue and profit derived from hardware at IBM have both declined over the last five years. And just yesterday, Oracle announced that its hardware revenues were down by 23 percent and that they aren’t expected to grow this year.

The simple fact is that most hardware manufacturers – like Bosworth’s database vendors – have not responded to what customers have indicated they want – in most cases because it’s at cross purposes with their margins. While they furiously add new features to hardware in an effort to justify their premium pricing, the market has accelerating its consumption of lower cost, more available alternatives in cloud or ODM gear in spite of their respective limitations. Hardware vendors are guilty, in other words, of overestimating the value of innovation at the expense of convenience. Worse, Jevon’s Paradox tells us that increased technical efficiencies – such as the public cloud’s instant provisioning – will lead to increases in consumption for the parties that provide it. Parties like Amazon.

Enterprise hardware vendors, like their software brethren, have an important question to answer: how to offer customers what they want without jeopardizing their business in the process. The market makes clear what the answer is not, at least on a volume basis: packing more features into ever higher priced hardware. The likely candidates for revenue growth moving forward instead will incorporate a combination of sources rather than relying on the hardware alone – sources such as data or network-enabled services.

Given that hardware vendors tend to be maniacally focused on the hardware, however, it remains to be seen whether they will be able to pivot culturally, embracing alternative revenue models. All the more so because the evidence is mounting that they won’t have much time to do so.