On Tuesday, Dell accomplished what Sun Microsystems never could: they bought their way out of the harsh scrutiny of the public markets. And indeed, one time Sun financier KKR was one of the potential buyers initially approach by Dell, according to the New York Times.

BloombergBusinessweek’s Ashlee Vance may be correct when he asserts that the deal was motivated in part by Michael Dell’s preference to remain atop the company bearing his name, but the ultimate import of this transaction has little to do with leadership. This deal is essentially about buying Dell the time to retool its business in private. With this deal Dell and its investors are betting that – with adjustments – the company has the opportunity to return to a position of prominence. The transaction also implies that this transition will be difficult enough that one or more quarters of poor returns lie ahead, and that the attendant negative publicity associated with having these played out in public would challenge the recovery effort. In short, a conclusion not unlike what Sun reached several quarters prior to its eventual acquisition.

It is necessary to note, of course, that the financial positions of the two firms are quite distinct. Where Sun was hemorrhaging cash, particularly following the acute economic crisis of 2009, Dell is merely stagnant. Witness Dell’s annual revenues for the last five years. 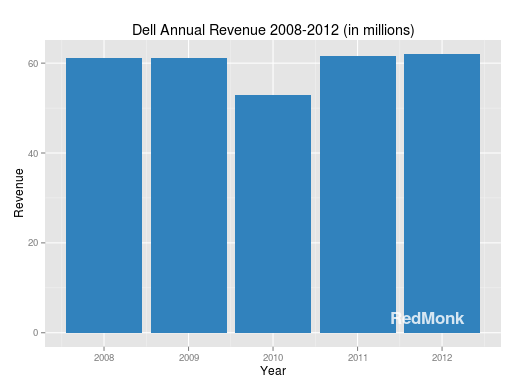 The reasons for this stagnation are no mystery. As has been well documented, the ongoing and accelerating disruption of the PC and server markets by tablets and ODMs/public cloud providers respectively have stalled Dell’s attempts at growth and forced a change in strategy. Beginning with its $3.9B acquisition of Perot Systems in 2009, Dell has attempted in recent years to refashion itself from commodity PC supplier to higher end solutions provider with mixed success. The good news for Dell is that its enterprise solutions business has picked up some of the slack from its declining desktop fortunes (from 23% of revenues in 2008 to 29% in 2012), but the bad news is that a decline in a business that represented 61% of your revenue five years ago is difficult to offset and still grow. 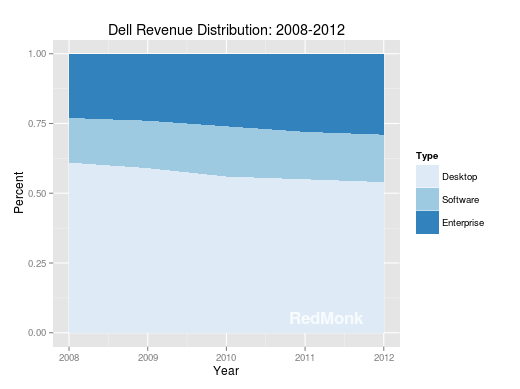 In many respects, the Round Rock company is following in IBM’s footsteps. In 2005, IBM made the controversial decision to decommit from its iconic PC business, selling the division to Lenovo. The justification for the transaction revolved around margins, or more particularly the lackthereof. IBM believed then that the PC business was unlikely to command the necessary margins moving forward, and thus the business was sold. Even absent the disruptive threat of tablets and smartphones, the PC business was just not compelling. And this year’s financial results validate IBM’s strategy to some extent: while overall revenues were off 2% from 2011, its net income – buoyed by its high margin businesses – was up 11%.

It’s no surprise then that Dell found this strategy attractive. The question facing Dell and its new partners is whether it can become what it wishes to be faster than its core businesses are disrupted. Also, what does it wish to be? As Vance says,

A truly spectacular return to the public markets, though, would require a new idea that’s as good as selling customers configurable computers at a low, low cost.

With all due respect to high margin systems and solution markets, they’re probably not that next big idea. Not due to any intrinsic limitation of the model – indeed, it’s proved to be extraordinarily profitable for a handful of businesses – but rather due to the extant market competition. While a “trillon dollar wealth transfer” is likely overstating the shift, high margin markets are already besieged by volume oriented alternative models, from open source to cloud to SaaS. The relevant players in that market, therefore, are competing ever more intensely for a threatened share of total dollars; HP’s opportunistic broadside following the announcement of this transaction is but the first of many to come, as enterprise players seek to protect their turf while preying on the missteps of their competitors. Having committed itself to this path, Dell must compete fiercely in the enterprise solutions market, but it should not expect immediate or outsized returns from it.

What then should Dell look to instead for its next big idea? Absent an as yet unannounced iPod or iPad-style breakthrough, one possibility might be data.

If we compare Dell to its would be enterprise systems vendor competitors, one obvious advantage Dell has is in its distribution. While Dell may not be the largest hardware shipper by total volume, they almost certainly have the widest distribution by number of customers. Only HP can rival its penetration of small and medium businesses, and Dell is one of the few vendors with experience shipping to consumers, enterprises and startups alike. While much has changed since 2006, Joyent’s experience in attempting to acquire servers from Dell, HP and Sun is instructive here. Whatever its other strengths and failures, Dell is built to ship hardware on a volume basis, and perhaps most importantly, is not dependent on a high touch model.

As a result, Dell has shipped an enormous volume of equipment over the years. At present, however, the shipped hardware represents a limited opportunity for the vendor. Maintenance and support agreements will generate revenue (against the costs of servicing that business), but the hardware in use is of little utility to Dell otherwise.

In this distribution lies an opportunity. If Dell, as an example, was able to collect data from a subset of its shipped hardware, even if it was a small fraction of the total machines it has shipped, the volume of data that could be aggregated and analyzed is quite large. Assume that Dell collected very basic information like the following – on an opt-in basis, of course – about its running machines:

A few years ago, of course, such a collection approach would have been unthinkable from a privacy perspective. Today, compared to the search histories maintained by providers or the private content social media sites are regularly exposing, this kind of basic anonymized telemetry is mundane, even harmless. And worst case, those concerned about collection could opt out.

Within a short span of time, Dell would have in depth intelligence on hundreds of thousands of running hardware instances across the world. The kind of intelligence that could feed everything from marketing (“large screen monitors are increasingly popular in the New York area”) to sales (“the average age of the machines in your oganization is four years, let’s talk”) to product design (“maybe we need to build a product around a large monitor”) to support (“machines with these two connected peripherals are experiencing kernel panics”). And this kind of aggregated telemetry would be useful to other third parties as well; software vendors would pay to know more about their target customers’ hardware profiles, governments or universities could use information on power consumption and network utilization to assist in resource planning and so on. By leveraging their strength of distribution to collect intelligence, Dell would at once achieve a significant competitive advantage in market intelligence and open up brand new potential revenue streams.

It’s likely that engaging in such a data based business model would necessitate another acquisition, because Dell lacks expertise in this area – both technically and in terms of the mechanics of the associated revenue opportunities. Fortunately, Spiceworks, a company just down the road from Dell in Austin, has been collecting and leveraging similar data successfully for years now.

Dell is unlikely to view data as optimistically or strategically as the above, of course. Both because the model is poorly understood generally and because Dell is effectively all in on its upmarket play and is understandably focused on that transition. But if it’s looking for a new idea with real, potential upside, Dell could do much worse than being the first systems vendor to leverage data as aggressively as big technology vendors like Facebook, Google and Twitter who don’t happen to actually sell technology. Data is underpinning the future of technology business models, and Dell could be the first large systems vendor to capitalize on it.