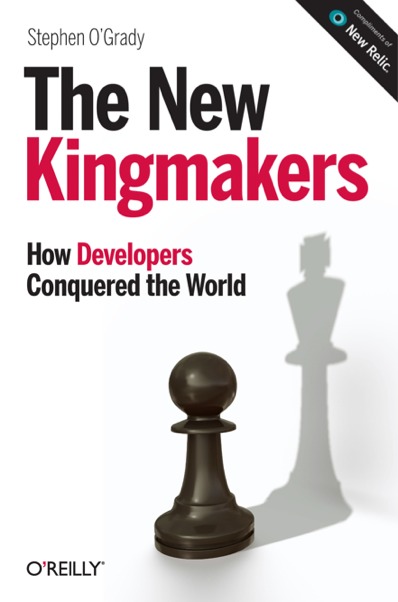 As some of you have probably seen by now from Twitter, my book The New Kingmakers was released today by its primary sponsor, New Relic.

Though just published, the book was actually born last spring. After reading Erik Brynjolfsson and Andrew McCafee’s excellent – but not overlong – “Race Against the Machine,” it occurred to me that a similarly sized volume could cover, at least in broad strokes, the New Kingmakers story. Taken from a piece I’d written back in September of 2010, the New Kingmakers phrase describes the growing trend of developers, rather than their employers, being the real technology decision makers. Empowered by democratized access to software and infrastructure as well as a few other trends covered in the book, developers had ceased being a commoditized resource – if indeed they ever were one (neither Bill Gates nor Steve Jobs would ever have made that argument).

Instead, developers were and are a new and powerful force to be reckoned with. In the technology industry, yes, but virtually every other industry from healthcare to media to politics to sports as well. The New Kingmakers is nothing more or less than an attempt to document this story: to prove that developers are ascendant, to examine how this came to pass and to provide actionable recommendations on how to operate in this new, developer-driven world.

While writing a book – even one of an abbreviated length – was an undertaking that was paradoxically both easier and harder to complete than anticipated, I found myself for the first spring in a few years not enrolled in a statistics class. Instead of doing homework and problem sets in R every Sunday afternoon, then, I sat down and wrote for a few hours. Fast forward a few months, and I had a draft that was first circulated through friends and family (it’s handy being the son of a former English teacher, the husband of a lawyer and the friend of a professional writer).

After soliciting feedback from Twitter on whether to self-publish or not – which interestingly overwhelmingly favored the former route – I decided after a call with Mike Loukides ultimately to go with O’Reilly. Partly because I know and have great respect for the O’Reilly organization’s work, and partly because this was my first rodeo, so to speak. That decision has had its pluses and minuses, which I’ll get into at another time, but in the end O’Reilly found a sponsor in New Relic who understood how fundamentally important the developers have become (you can read more about their motivations for sponsoring the title in a blog post here). All of which was fortuitious, because not only do we know and like the New Relic team, they also happen to be RedMonk clients.

Which brings us to today. If you’d like to learn more about the title, the website walks through the premise in more detail, and includes the Table of Contents, FAQ, Namechecks page and more. If you’d like to read it, thanks to New Relic, you can register with them here (no, no credit card is required) and get a free copy of the New Kingmakers. You can also pre-order the title on Amazon here. Update: New Relic is the exclusive distributor of the book until March. If you want more info on that, see here.

Whether you buy in to the overall premise or not, I hope those of you who take the time to read the book find that it makes you think. And for the developers of the world, here’s hoping this makes your lives just a little bit easier.

My thanks to my wife Kate, my mother Sheila, my business partner James and – especially – my friend Mike Robbins (who did a very detailed copy edit) for their help in reading drafts of the work. Thanks to O’Reilly for their role in polishing it for publication, and last but not least the good folks from New Relic for helping to bring the title to all of you for free.

Leave a Reply to Can your career be automated? | Blog on People and Technology Cancel reply