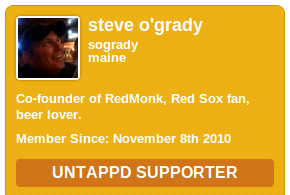 Two years, one month and three days ago I checked into Untappd for the first time. My first checkin, naturally, was an Allagash Curieux. For those unfamiliar with the application, Untappd – besides being the official social network of the Monktoberfest and Monki Gras – is essentially a Foursquare for beer. Each new craft beer you try can be checked in, with the option to record a variety of other details like location, rating and so on.

Built by Greg Avola and Tim Mather, Untappd is entirely bootstrapped, since, oddly enough, the venture capital community hasn’t yet perceived the obvious data revenue opportunity the startup presents. Untappd for now is an evening/weekend affair, as both of the founders have day jobs to pay the bills.

Last Wednesday, Untappd announced the availability of a “Supporter” subscription. At the cost of $5 a month or $50 per year, Untappd would unlock for users a special badge (like Foursquare, Untappd leverages badges heavily), make available a stats page and permit the direct download of your checkin history in several formats.

Like many Untappd fans, becoming a Supporter was an easy decision for me. The features were useful: while the export data was already available via Untappd’s free public API, the ability to simply download it as a CSV was welcome. But even if the subscription included no new features, I’d have signed up.

As my own interest and that of many of my friends and family in craft beer has grown, Untappd’s made the critical leap for me from trival to home screen application. Both for tracking my own history – which beers I have enjoyed, which I haven’t, and where – as well as following my friends’ own rare beer finds and such. One of the reasons we had Greg speak at the first Monktoberfest and subsequently at the Monki Gras is that Untappd is at the heart of the intersection of social and technology: it’s fundamentally altering consumption and social interaction patterns with technology. Just as Foursquare incents users to frequent new establishments or build their loyalty with a single venue, so too does Untappd encourage an entirely different set of behaviors amongst its users. And given the generally higher margins associated with the craft beer commercial ecosystem, revenue shifts are coming – just ask the large domestic brewers.

The venture capital community, I have confidence, will see the attendant economic opportunities in these behavioral shifts eventually and provide the funding necessary to take the Untappd business to the next level. Until then, however, I’ve wanted to do whatever possible to ensure that Untappd not only remains viable as a service, but grows, adds new features and more. Which is why the Supporter subscription was, to me, a welcome development. While the actual cost to me was marginal – less than the price of an average craft beer draft – the hope was that in aggregate, Supporter revenues would at a minimum help offset the costs of running the service.

Which are, in all probability, substantial. On their second birthday in October, Untappd had over 300,000 users who collectively had checked in 14,000,000 beers. Keeping the service up and running during holiday or festival related spikes, not to mention the development of both web and native (via PhoneGap) Android and iOS clients, is presumably expensive in both dollars and hours. It’s likely, in fact, that at a contribution level of $5 per month, I’m stealing from Greg and Tim.

A subset of users didn’t see it that way, however. Some predictably failed to actually read the announcement, reacting angrily to Untappd suddenly “charging” their users, in spite of the fact that every feature of the application available prior to the announcement remained free. Complaints born of simple ignorance, however, were easy enough to dismiss. More troubling was the segment of the Untappd userbase that believes itself entitled to functionality, for free, forever. This segment appeared to be, in part, the reason Untappd had to follow up with a post explaining that, in fact, nothing had changed for those users that didn’t wish to pay, that they weren’t holding your data hostage, and so on.

As with the outrage that accompanies outages or changes to other free services like Facebook, Gmail or Twitter, developers are essentially put in a no win position. While costs of development and for software, hardware and bandwidth have and continue to come down substantially, applications are neither free to build nor to maintain. But users have become expect the costs to be born by an alternative revenue model, advertising-oriented or otherwise. Oh, and they don’t just expect the service for free, they expect the service level to be no outages, ever.

This is, in all likelihood, an unsustainable expectation moving forward. Many services will remain free, but others – particularly the bootstrapped – will need help, particularly if venture capital dollars become harder to come by for consumer web companies. Some of that help will likely come from the leveraging of aggregated user telemetry (just imagine how much Untappd knows about the craft beer community right now) but with data markets systemically inefficient at present, direct user contributions will be an important source of revenue.

If there’s an application you enjoy using then, please consider kicking in a few dollars to support the developers behind it. They’re very often making your life better at the cost of their free time and money. A few bucks that you probably won’t miss can add up for them, and result in a better, more innovative application for you.

Pay for what you love, and everybody wins.

Disclosure: I know Greg, the co-founder of Untappd, personally.