On December 24th, 1999 Microsoft was trading at $58.719 a share. In the decade plus since, it has generally traded for approximately half that valuation. As I write this, a single share of MSFT can be had for $30.90. The stock’s general malaise has been attributed to different factors over the years. From the Innovator’s Dilemma to the misjudgement of the internet opportunity to questions about leadership, the cause of the company’s stagnation depends largely on who you ask.

One possibility that is rarely discussed in this context, however, is that the value of software broadly is in decline. Maybe it’s not just Microsoft, but the market around it?

There is a great deal of evidence to suggest that this is the case. The Top 20 firms that sell software, as measured by PwC, are, on average, 47 years old [coverage]. The youngest of them was founded in 1989. Even allowing that this is due in large part to normal merger and acquisition patterns, in which large companies effectively outsource risk to startups, the fact is that the market has not generated a large technology vendor oriented around selling software in twenty-two years.

The next generation of large technology companies, meanwhile, not only have chosen not to sell software, they behave as if the software itself is of little economic value. Google’s publication of the Google FileSystem and MapReduce papers, for example, allowed an erstwhile competitor to build Hadoop. Android, the primary challenger to Apple’s iOS, is made available for free. Facebook built Cassandra to manage its Inbox, released it as open source software, and then replaced it with open source software originally written by a startup acquired by Microsoft. Twitter is up to 77 public repositories on GitHub.

Even traditional vendors appear to be hedging against potential long term declines in either revenues, margins or both from software licensing. There is a reason that Oracle is willing to bet $10 million per account to push an appliance that combines hardware and software: their margins will be better than with standalone software, over time. Just as there is a reason that IBM’s Watson artificial intelligence offering is not available as an off the shelf SKU – and it is not simply the complexity of the product. It is reasonable to assume that IBM, a company that once manufactured typewriters, is in part planning for a future in which realizable software revenues may be compromised.

The latest evidence to date that software valuations are in decline, however, may have arrived via Microsoft’s Surface launch. For all of the praise that the tablets earned at launch – in spite of the lack of information on availability, battery life or pricing – the fact remains that Surface is a seemingly abrupt and fundamental break from Microsoft’s core model, summarized in this 2004 anecdote from then Group VP Jeff Raikes:

To illustrate this, Raikes told the story about his decision to leave Apple for Microsoft in 1981. Walking down the Microsoft hallways for his interview, Raikes said, he was struck by the variety of computers in the building — from Radio Shack, Wang, Digital Equipment Corp., and dozens of other hardware manufacturers.

In contrast, Apple was creating software to run on its own hardware, which remains a key difference between the companies to this day.

“I wasn’t sure who was going to win in the hardware business,” Raikes told the students, “but it sure looked like Microsoft was doing the software for all of them.”

With Surface, Microsoft is no longer making software for all of them. Having seen the field bested by Apple, it has decided to bet on itself. In the wake of the launch, industry observers have hastened to point out that this far from Microsoft’s first foray into the hardware space. From mice and keyboards to the Xbox and Zune, Microsoft has tactically engaged in hardware markets where it perceived need, opportunity or both – with a decidedly mixed track record. But from a revenue perspective the firm has never been about anything but software.

That Microsoft felt compelled to jeopardize long term OEM partnerships with Surface is indeed, as Ashlee Vance has argued, an indictment of the PC industry’s collectively inability to compete with Apple’s innovation in hardware. But is also, as Horace Dediu suggests, another indication that software on a stand alone basis is a problematic revenue foundation:

Think about a post-PC future exemplified by the iPad. Apple sells the iPad with a nearly 33% margin but at a higher average price than Microsoft’s software bundle. Apple gives away the software (and apps are very cheap) but it still gains $195 in operating profit per iPad sold.

Fine, you say, but Microsoft make up for it in volume. Well, that’s a problem. The tablet volumes are expanding very quickly and are on track to overtake traditional PCs while traditional PCs are likely to be disrupted and decline.

So Microsoft faces a dilemma. Their business model of expensive software on cheap hardware is not sustainable. The future is nearly free software integrated into moderately priced hardware.

That is a future which is problematic for Microsoft, for obvious reasons: the company that has largely been built on the backs of Office and Windows must become more like Apple to compete. But the trend that Microsoft is pivoting in response to will have far wider ripples across the technology landscape. On a list of major technology vendors, we are tracking nine with a market capitalization north of $60B. 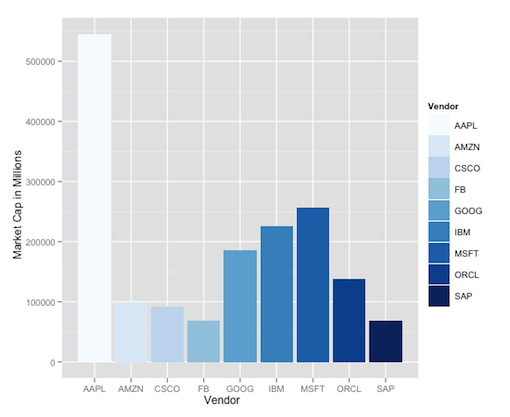 Of these, one third – Microsoft, Oracle and SAP – could plausibly be argued to be driven primarily by revenues of software sales. Of this subset, two – Microsoft and Oracle – are trying to diversify their businesses away from software based revenues; the former through Surface, the latter via Exadata. Which leaves SAP as the lone software focused large technology vendor.

Software licensing is and will remain a viable revenue stream for the foreseeable future. But both public market valuations and observed behaviors of strategic software players indicate that the days of software licensing as a primary revenue stream are potentially over. But while that may seem a Cassandran prophecy, the valuations of Facebook and Google in particular – the former’s post-IPO crash notwithstanding – point to the next frontier in revenue: making money with software rather than from software. Data, in in our view, is the most likely – and practical, given the challenges of the hardware business (see Oracle’s integration of Sun) – near term replacement revenue stream for most software businesses, particularly those best equipped to maximize distribution: open source and Software-as-a-Service players. The future we forecast in 2007 is here, right on schedule, five years later.

If the world’s largest software firm pivoting into hardware doesn’t convince you that the world is changing, my question to you is: what would?

Disclosure: IBM and Microsoft are RedMonk customers. Apple, Facebook and Google are not.