We see this qualitiatively, as the nature of our engagement shifts to the layers above, below and around the operating system; from the virtualization substrate to the middleware equivalent abstractions for application deployment to the management tools that both provision the above and keep it running.

The simplest explanation for this might be the decline and acquisition of Sun, and the subsequent deemphasis by new owner Oracle to the Solaris brand generally and OpenSolaris specifically. But for this to be true, we should have expected to see commensurate gains to other operating system related terminology, be that Windows, Linux or combinations of both.

We see no evidence of this. Our data shows instead a profound shift in inquiries to layers of abstraction above the operating system; Node.js, for example, is massively trending over the past six months, occupying three of the top four spots. As are terms such as “PaaS,” “cloud fabric,” and “saas cloud.” We can even observe in real time the difficulties developers are having in digesting the implications of the new development paradigms and related terminology via queries like “cloud & saas & difference” (#23 last six months).

The obvious conclusion is that the operating system market is in transition.

The deemphasis of the operating system is even apparent from a resourcing perspective. The team originally responsible for DTrace, a still differentiated piece of observability technology built into Solaris, have all left Oracle. Rather than attempting to build another operating system or helping to build a competitors, many have joined Joyent. They may continue to do operating system work there via the illumos project, but their business will be the cloud, not distributable operating systems.

There are a variety of reasons for the decline in visbility for the OS; most are likely familiar to you. The ascendance of cloud, the delivery of applications in a network context, open source led shifts in availability and procurement, the accelerating fragmentation of application development, historical trends towards further abstraction, platform consolidation. All are contributing to a shift in the way that applications are designed and deployed, which in turn impacts the role of the operating system [coverage].

It’s also true that operating system adoption on the desktop remains highly stratified; with the long predicted Year of the Linux Desktop yet to arrive, consumers PCs are still primarily either Mac or Windows.

The enterprise server world is a more mature market than either mobile at least, and has therefore already weathered the rounds of consolidation yet to arrive in the world of handsets and tablets. There are fewer legitimate contending platforms in the server market, even as at least one of those (Linux) shows signs of pending fragmentation.

Even these fewer choices, however, are increasingly abstracted from application developers. What is the operating system behind Microsoft Azure, Engine Yard, Force.com, Google App Engine, or Heroku? The answer is, in varying degrees, none of your business. These and other PaaS vendors are aggressively distintermediating the operating system by removing it as a choice. 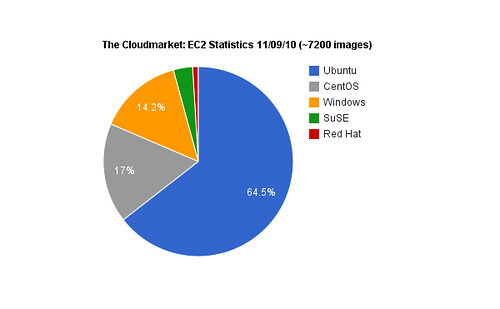 It’s true that this is a survey of available images rather than deployed images. But it’s equally true that this distribution would have been unimaginable even twelve to eighteen months ago: the leading commercial distributions make up only 18.5% of the catalog. Given that we’re still seeing a distribution in the catalog, it’s clear that the operating system matters to cloud deployments. People value choice enough to have created better than 7200 different options. Precisely what matters about those operating systems, however, appears to be in transition.

Within the datacenter, on the other hand, little has changed. Which is fortunate for suppliers, because the majority of revenue is still derived from infrastructure maintained and run by businesses themselves. Enterprise purchases still overwhelmingly favor traditional operating system suppliers: Microsoft (Windows), Red Hat and to a lesser extent Novell (Linux), with the majority of the remaining share divided between Unix vendors (HP, IBM, Oracle, etc). The dramatic spike in interest in Red Hat Enterprise Linux 6 speaks to the continuing appetite for new operating system features in a variety of markets.

As long as the enterprise markets remain the dominant revenue source, then, operating system vendors have little to fear. The challenge – still theoretical – will be when the shift in developer interest we are beginning to observe begins to manifest itself within an enterprise context. At present, definitive statements that the importance of the operating system will be as diminished as the commodity hardware platforms they most frequently run on today are purely aspirational. On the other hand, who would have predicted fifteen or even ten years ago that one of the major players in the market, a $750M business, would be an entity that sells software that’s available for free?

The data we have argues that change is coming. That it is, in fact, already here; it’s just unevenly distributed. It will be interesting to see how the various operating system suppliers leverage, fight or succumb to it. Just as fascinating will be whether the incumbents are able to pivot neatly from one dominant role to another, or whether that process will advantage the contenders. History is no guide here, as we’ve seen both scenarios play out repeatedly.

Disclosure: Canonical (Ubuntu), Microsoft, PhoneGap and Red Hat are RedMonk clients. Novell and Oracle are not.