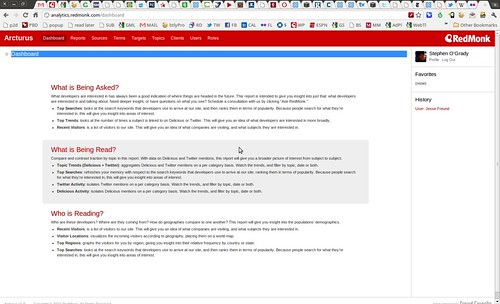 “It’s to learn where your initial hypothesis is wrong that you launch.” – Paul Graham

The venture capital community has an idea called an “investment thesis.” This, as Fred Wilson describes it, is the lens through which investors see the world and a potential investment’s place in it. RedMonk is in the analyst business rather than the venture game, but if we had an investment thesis it would be simple: developers. Using the term loosely, of course. In a devops world, we use developers interchangeably to refer to sysadmins, designers, architects and even the odd enlightened DBA. Geeks, makers, call them what you will: they are our people. As James put it, “At RedMonk we celebrate the practitioner and their methods.” In a world in which “there’s an app for that” has been trademarked, the idea that these folks are important doesn’t seem that radical, but trust me: things were not always thus.

In the old days, developers were an afterthought for most technology companies. Vendors and their marketing arms targeted the buyer, better known as the CIO. Big analyst houses sprang up to arbitrage the knowledge asymmetry from vendor to customer, and everyone was happy.

Except the developers, of course.

As it turned out, they didn’t always like the tools the analysts recommended and the buyer bought for them. Which isn’t surprising, because no one had thought to ask them what they wanted, instead trusting third parties who may or may not have actually used the tools for recommendations. A strange thing happened along the way, however: developers found themselves free tools that they liked betted than the commercial ones. Tools that they didn’t have to ask anyone for. Tools that they could actually modify if they needed to. And my how things changed.

Fast forward to the present day, where the developer is firmly in the driver’s seat. The largest vendors in the world – consumer and enterprise alike – are falling over each other these days to court the “new” kingmakers. Apple, like Microsoft before them, is standing on the shoulders of giants: the teeming millions that build the applications that make their platform so compelling. From Amazon to Google to IBM, developers are the new It crowd.

None of this surprised us at RedMonk. It is, after all, what we’ve been saying since, oh, 2002 or so. What we’ve been saying, however, has always been qualitative in nature. Until today. Let me introduce you to RedMonk’s first product, RedMonk Analytics, referred to internally as Project Arcturus. RedMonk Analytics is, as far as we’re aware, the world’s first developer intelligence tool. The product is intended to turn industry analysis on its head. Rather than analysts telling CIOs what to buy, we’re going to tell customers what the developers want so that they can provide it.

Project Arcturus was born at least three years ago, as I crawled through the data gathered by our various web analytics tools. Data that we were, for all intents and purposes, wasting. You can learn some interesting things from your website, if you listen to it. Particularly interesting things if, like RedMonk, you have a highly specialized audience.

The last time RedMonk’s share of visitors using Internet Explorer placed higher than third was five years ago. Almost eighty percent of our traffic these days is from Firefox and Chrome, and hell – almost 20% of the visitors to my blog run Linux. The only audience visiting our blogs, in other words, are developers. Which makes sense, because our content is written for developers. What could we learn from this audience if we but paid attention? This is what Arcturus is all about. Newspapers are using their web analytics data to inform their coverage; we’re doing the same, but also making it available to you.

Arcturus mines our web traffic – as well as some third party data sources like Delicious and Twitter, but more on that in a bit – for insight, which we capture and will sell to our clients. Who can then turn around and use this quantitative insight to cater better to what developers actually want. Neat, huh?

We think so too.

As the small crowd of people I’ve done private demos for to date can tell you, I liken the state of Arcturus today to Amazon’s EC2 circa 2006. Not in importance, obviously: absurd wouldn’t begin to cover that claim. Rather in terms of its maturity. EC2, remember, was pretty bare bones when it launched: a far cry from the product it is today. Arcturus, similarly, is in its infancy. What we’re doing here is exactly what Graham talked about above: we’re launching to see where our initial hypothesis is wrong. Because of course it will be, somehow. Think of this as a beta.

Right now, Arcturus can give you some interesting tidbits, served up by topic. Customized on a per client basis, your dashboard will be prepopulated with, say, open source and big data metrics if you’re in that space. Or maybe cloud and IT management. Or you can customize your own.

Either way, the system will give you the basics like where the developers are coming from, for example.

Lots of sites do that, of course. But we can also tell you, by ranking, what developers are interested in. To get this we comb all of the incoming traffic to our various properties and simply watch the keywords that geeks use to end up on our site.

Did you know that Node.js takes 3 out of the top 5 spots in October searches? Or that “rds mysql licensing costs” is the 37th most common query to RedMonk, one spot ahead of “migrating from iphone to android?” You will.

Even better, we can tell you where these developers are coming from – those that come in off a corporate network, anyway (we’re stripping out generic IPs from ISPs and the like). Which university’s students are reading up on Node.js? Which government agency staffers are worried about the future of Java? Which Fortune 50 organization is digging into Big Data and NoSQL?

Use Arcturus and you’ll know. How are different subjects trending on Twitter and Delicious?

We can tell you. And this is just the start. With what we have now, plus a few interesting additions we’ll be rolling out in the weeks ahead, it should be increasingly compelling for those of you who need to understand developers. And who doesn’t, these days?

“Wait, you’re tracking me? You know who I am?” No, we are not tracking you: we’re tracking the aggregate of you. Basically we’re looking at the same data that any web analytics package will collect for you. We’re not using Facebook connect, there’s no registration system, etc. Arcturus has no notion of you as an individual – you’re just an IP to us – so rest easy.

Besides emulating Amazon – who, incidentally, provides the infrastructure foundation for Arcturus – in the “launch early” department, we’d like to mirror them in one other aspect: iteration. We plan to have a steady drumbeat of new reports, data sources and features for customers to look forward to. We’re already planning for the next version, which will offer more sophisticated ways to parse the data we have, but more importantly will be integrating data we’ll be collecting via partners. You’ll have to stay tuned for more on that, but in the meantime we can tell you that we’re putting our heads together with our friends at Infochimps, for starters.

Do you have a datasource that’s developer related? Great, drop us a line (analytics [at] redmonk.com): we’d love to talk to you. Alternately, if you don’t have data but know what you would like to see, be sure to ping us. We might be able to find it, and bump your needs up on the queue.

First, the bad news: Arcturus isn’t free like all of our content is. Sorry. We did have to pay to build it, remember, and we have to pay to run it. So no free rides, at least for now. That’s the bad news. The good news is that the product is going to be available under the same, simple subscription terms our RedMonk services have always been. Those of you with popular developer-centric blogs should drop us a line, as well: we might just have a program for you. We’re going to be absurdly picky about who gets in, just to warn you, but ping us and at least we can chat.

Big picture, Arcturus is in a private beta. Fully functional, but rapidly evolving. Current RedMonk customers are eligible for discounted pricing, and pricing is further discounted during the beta period. Now’s the time to sign up, in other words. If you’d like to schedule a demo, talk pricing or simply are interested in future product updates, feel free to add your name to the list here.

Who might use Arcuturus? Well, anyone interested in developers, obviously. But more specifically, here are a few of the obvious candidates:

And so on. As we continue to build out the dataset, you can expect to see more and more data about the developer demographic made available to you at regular intervals.

Before I forget, let me give credit where credit is due. I’ll get deeper into how Arcturus is built in the next post, but for now let me thank the gang from Crowd Favorite. Still our favorite development shop, they’ve done a remarkable job shepherding us through the process of building an application that no one’s ever built before. From walking us through the implications of different architectural choices to helping turn my abominable mockups into a working application, I trust these guys. We’re pretty thrilled with the work they’ve done thus far, and it’ll only get more interesting from here on out. Can’t recommend them highly enough.

Some of you, no doubt, are curious about the name: what the hell is Arcturus? Well, what better name for our Evil Plans than the one Homer Simpson worked on for Hank Scorpio, the Bond villain? Because as he says, Project Arcturus couldn’t have been successful without you, the developers.

Please join me in welcoming RedMonk Analytics into the world, and be sure to sign up if you’re interested in hearing more. Next up, look for Part 2: how Arcturus was built.