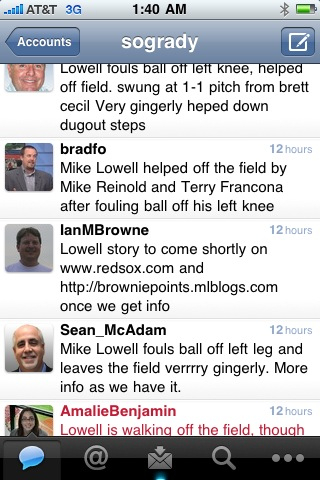 “You see popular Web sites racing to have the most detailed live coverage of a keynote address by Steve Jobs, even though the video will be online shortly thereafter, and the key points from the event will be capably summarized everywhere. You see it when pundits predict what Steve Jobs is going to announce in a keynote the day before the keynote.”
– Rafe Colburn, “The two ways to break news”

Concur. Just had this same conversation yesterday, in fact.

What we’re talking about is simple: non-investigative print journalism is a commodity. It’s not much more complicated than that. Reporting as the art of regurgitating the traditional who, what, where and when’s demise probably began with the rise of TV, maybe even the radio. Today, everybody knows everything. Fast. See the above graphic, which earned itself a post entitled “the inevitable, regrettable outcome of all of the Red Sox beat writers Twittering.”

What everybody doesn’t know, however, is what it means. What’s the significance? What’s the context? And so on. I honestly could care less who was first had the news that the healthcare bill had passed, but I’ll put a premium on someone with the ability to put the enormous bill in context, whether that’s for me or in the historical sense.

Like commenters on Gizmodo or Engadget, however, journalists seem to be intent on being “first,” whether the readers care or not. Not being one, I cannot comment on whether that behavior is a product of the training, the industry culture, or both. I can tell you it’s not helping. And the good ones know it.

Consider News.com’s Stephen Shankland. Besides being one of my favorite reporters to work with, he’s one of my favorite reporters to read. I have absolutely no idea whatsoever what his record is with respect to “breaking” news; it could be excellent, it could be terrible. I just don’t care. His work is high quality because when I’m done reading a piece, I’m not left with a bunch of obvious questions.

With social networks such as Twitter making the spread of news effectively effortless and efficient at scale, there’s little value in being first. If I was running a media outlet, then, I would be seeking other areas with which to differentiate myself.

Because focusing on first might ultimately make you last.