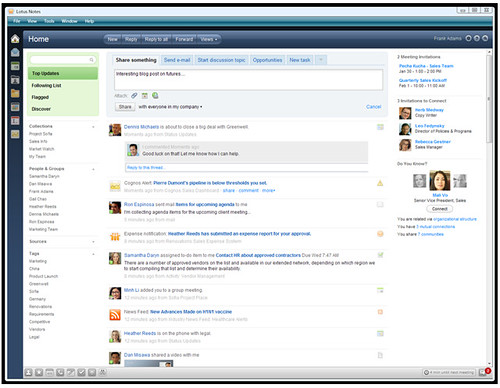 It’s easy to view the recently previewed Project Vulcan from Lotus as the Facebookification of Notes because, well, it is. In the waning years of the last century in particular, the Lotus enterprise collaboration suite looked it, lagging significantly the next generation collaboration user interfaces evolving, daily, on the web. But midway through the ought’s or whatever we’re calling it, the folks from Lotus began expanding their horizons, taking their cues from the web. The first product manifestations of this design evolution were Connections and Quickr.

But to dismiss it as merely a pretty face, a gussied up nod to the Gen-Y crowd flooding the workplace, misses the point. Under the covers, IBM is attempting to solve the same problem that anyone with an email account these days has: volume. Or, by extension, attention, referring to the time required to process said volume.

There’s no need to rehash the specifics of the systemic attention deficit. There might not be an app for that, but we do have a generally accepted definition of the condition. In addition to being a massively successful social network and the connectivity fabric for a couple of hundred million people, Facebook is part of the problem. The Facebook primary News Feed, for example, becomes increasingly unusable with each “friend” you add. Manageable at first, each additional contact becomes an input. These inputs, manageable individually, are problematic in the aggregate.

But consider the problem faced by those that would transition that experience to the workplace. If I lose the latest pictures of a “friend’s” kids or an account of their vacation amidst the noise of Facebook, it’s a pity. If I miss, on the other hand, an action item from my boss or a customer request in my Inbox, that’s a potential crisis. But it gets worse. Facebook, for the most part, is charged with handling little more than text and photos. That won’t work in an enterprise context, where businesses need the ability to collectively track everything from calendar to email to office documents to Twitter.

This might be, in other words, one of those cases where consumer simplicity genuinely isn’t enough for enterprise usage. Business apps can and do have far more bells and whistles than they need, but Facebook by itself just isn’t enough.

An enterprise Facebook clearly needs to be able to consume a variety of assets. Further, it needs to help users effectively manage that firehose, by any means necessary. Of those two, I would submit that it’s the latter that’s the real challenge. Google or Zoho, for example, offer tools that permit users to collaborate on presentations, share calendars, and the like. But who’s helping users triage their extended inboxes?

There are startups like Gist – who announced a partnership today with IBM, perhaps not coincidentally – and Threadsy attacking the space, but the short answer is that no one yet has a good solution to the over-hyped but very real problem of information overload. IBM included, Project Vulcan or no.

But of the firms with an eye towards attention management, IBM has perhaps the widest array of assets to bring to bear. They have the table-stakes collaboration pieces, as well as some interesting experience in the synchronization and federation of persistence mechanisms (think Notes databases or, more recently, CouchDB), whether that’s done client or server-side. All of which is interesting. What’s more so is their analytical expertise, from Cognos to IBM Research.

We know IBM sees analytics as vital moving forward, because everyone from Ambuj Goyal to Steve Mills have said as much. You don’t bother to create college curricula, after all, if you don’t need the people. Desperately.

In Vulcan, we may see why analytics are at a premium. For all the benefit of methodologies like GTD, the solution to the information overload problem will be algorithmically derived, because it must be. We can only ask the likes of GTD for so much; at 34 GBs per person, per day and growing, something has to give. What that is is likely to be determined, ultimately, by an algorithm. We’ll be using analytics, in other words, to tell us what we don’t need to pay attention to. It won’t be trusted at first, but that’s a problem for another day.

The idea of marrying analytics to collaboration is not new – I’ve been asking for it since 2004, actually – but its time is almost at hand. Vulcan could be the first implementation for the enterprise, if not the masses, slated as it is for a 2011 release. But it will certainly not be the last implementation. Whether Lotus gets it right or not, we’re all going need more analytics, all the time. Collaboration being no exception.

Don’t be fooled, then: Vulcan is more than an enterprise Facebook. It’s analytically assisted collaboration, and thus one to watch.