The funny thing about application stores is that Linux has had them for years. Ok, not a store, in the proper sense of that word, given that commercial transactions were not generally provided for. But the basic ability to aggregate applications for the purposes of centralized discovery and installation has been a core feature of major distributions since at least the late 90’s. Which makes it funny that I couldn’t pay vendors to talk to me about pressing this advantage. Piece after piece after piece after piece was met by crickets. Till even I more or less stopped talking about it.

It took iTunes and its billion applications sold to change things. Volume, as ever, wins. Thanks, Apple! With “there’s an app for that” now a part of the common man’s vernacular, executives from mobile to mainframe are scrambling for their own stores, their own apps, their own revenues. As well they should. Because, as Linux users like Tim have known all along, it’s just a Good Idea.

Just not as good as it eventually could be, if someone cares to connect all of the dots.

Consider the application installation experience for a moment – desktop or server. For most platforms, installation is relatively trivial, whether we’re talking .exe, .dmg or .deb. But what next? That’s the question none of the platforms have really asked themselves to date. Someday, I hope that will change.

For each Firefox – an application that anyone should be able to use out of the box – there are probably a dozen that most of us won’t know how to configure, adminster or use. Your solution to that problem currently is “find someone who knows all of the above.” Where? That’s your problem. Try craigslist. Or eLance. Or Monster. Or a network of friends and family. And so on. Maybe that works for you, maybe it doesn’t: either way, it makes little sense that there’s no more efficient connection than “good luck with that.” And to the long time readers here, yes, I’m about to get on my “network offering” hobby horse again. But I have picture this time.

Let’s try and ground this with an example. Say that I’m looking for a graphics program; right now on Linux or a variety of mobile devices, I’ve got access to an application store UI looking something like the following: 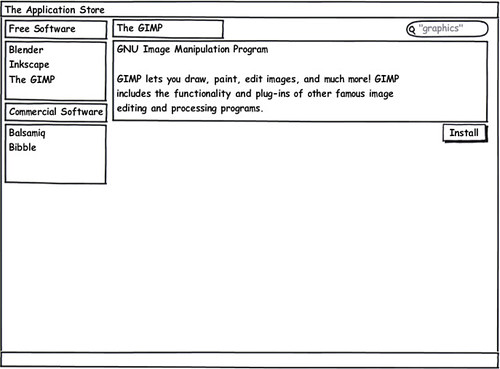 If we go no further, this is already a win. Given a best case alternative installation process that involves navigating to a website, finding a download page, downloading the package, and subsequently installing it, the Application Store experience is superior. A single user interface for search, identification and installation is, for users that have been exposed to it, transformative. More, the system has non-obvious benefits for users in application maintenance and updating.

But I have a problem: while I can install what seems like the best fit, the GIMP, easily, I don’t know the first thing about image and photo editing. Seriously, I am awful. And while I can try and hunt down a qualified resource, let’s be honest: I don’t really want to query craigslist for jobs related to “the GIMP.”

What if the store didn’t just sell applications, though? What if it sold architects, designers, and developers alongside the applications they’re qualified to work on? Maybe in a UI that looked something like this: 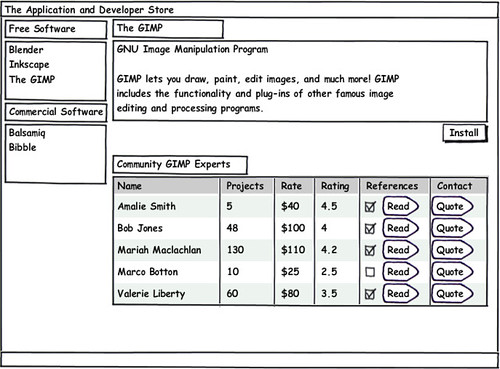 Among the obvious problems would be filtering and vetting the various resources, which is why users would have to be able to click through to individual profile pages that looked something like this: 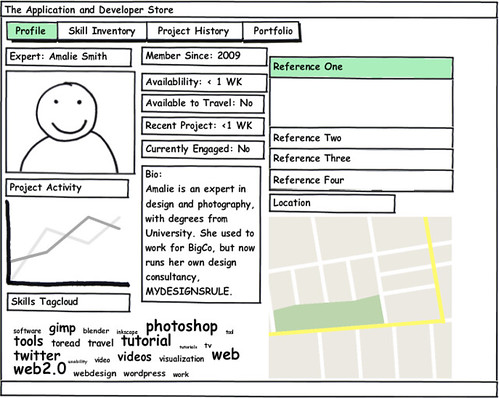 The perfect solution? Not so much. But it certainly beats what’s available on a great many contracting sites, and it’s miles more – and better – information than you’ll get from a craigslist posting.

To be sure, there are absolutely fundamental issues with integrating developer resources into an application catalog, ranging from abuse to fraud to spam. But the question isn’t whether there are issues – there always are – but whether they are economically worth solving. I suspect that they are, easily. Whether the platform monetizes the transactions on a commission or per transaction basis, the volume that could result from a platform-wide market would be substantial. Likewise, how many developers or even shops would not appreciate a more efficient connection to paying customers, along with platform-wide exposure? And as a user, I know I’d appreciate the help, because I can’t use the GIMP to save my life.

So just like vendors eventually got around to building the application stores I always thought they should, I’m quite convinced that sooner or later someone is going to conclude that connecting dots A (business problem) to B (software solution) isn’t quite as compelling – or financially rewarding – as A to B to C (qualified resource). Hell, Amazon already has most of the pieces they’d need.

I just hope for my sake – and for yours, lest I keep writing about this – that it’s sooner.