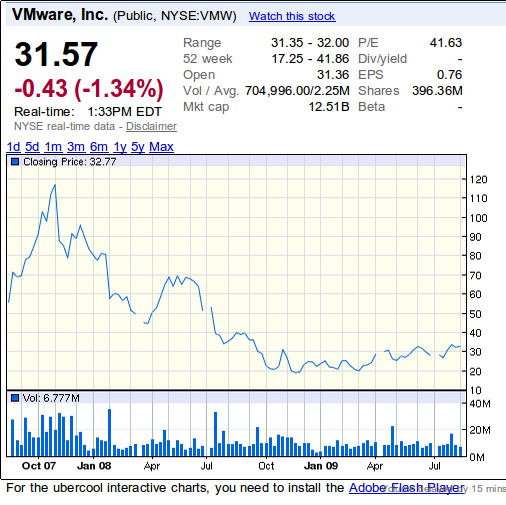 Only the foolish attempt to measure a publicly held firm strictly by its share price. Given the capricious and myopic nature of public markets, they’re at best an imperfect reflection of a company’s current performance and future potential.

That said, it would be even more foolish ignore the share price. Whether you agree with market perception or not, they must be considered, representing as they do public valuations. To make this point and properly incent executives, in fact, many comp packages are tied to the performance of the company’s stock.

I bring this up now because the graph above seems as plausible an explanation as any for VMware’s purchase of SpringSource, made yesterday. Like Red Hat before them, VMware seems to have decided to expand upwards from its revenue base in platform technologies to capture a greater percentage of the enterprise IT budget via a Java stack. They’re no longer content to leave that money on the table, in other words.

Why? My guess is growth. True, VMware is facing increasing competition, in the virtualization space from competitors ranging from open source projects to Microsoft to systems management vendors. But they still, for all intents and purposes, own the enterprise virtualization market. Which is great, and got them a nice big IPO. But on Wall Street, greed is good, and greed is not content with dominance in a single market – growth is the unrelenting demand. Just ask Microsoft. Or look at the graph above of their share price.

So while VMware has, as discussed previously, charted themselves a long term growth strategy in the cloud, it’s just that: long term. Judging from the recent market performance, the street’s looking for something more immediate and more obvious. Which is why SpringSource makes sense: the enterprise Java middleware business is as well understood on the street as it is in the technology industry. Not every IT manager will understand why Spring overwhelmed more traditional J2EE alternatives, of course, but they’ll understand its ubiquity. That, as much as anything else, is what SpringSource has traded on. It was built for many of the same reasons that the more popular dynamic language frameworks were created, but it speaks Java, and that’s comforting for the enterprise. Where comforting translates as easy to sell.

To explore this acquisition in greater detail, let’s turn to a Q&A.

Q: Before we continue, do you have anything to disclose?
A: Yes, SpringSource and a number of the other firms discussed here, from IBM to Microsoft to Red Hat to Sun, are RedMonk customers. VMware, meanwhile, is not. I think that about covers it.

Q: Can you sum up the news for those that haven’t seen it yet?
A: Sure. Yesterday afternoon, VMware announced its intention to acquire SpringSource for about $420 million in cash and other financial instruments.

Q: Is this about the cloud, as multiple outlets – the founder of SpringSource included – have claimed?
A: In time, yes, quite possibly. And there’s little question that SpringSource offers VMware an intriguing opportunity to be what 10gen, Project Caroline, et al have to date failed to be: the EngineYard or Heroku for Java, permitting seamless deployment of Java applications to on or off premise cloud infrastructure. But this is, to me, a longer term revenue opportunity, as VMware’s cloud pieces are still coming together and its hardware and datacenter capabilities are neglible relative to competition such as Amazon, IBM or Microsoft.

In the short to medium term, then, I think this is primarily about growth in a market with few barriers to purchase.

Q: What about SpringSource promises growth? Are they doing massive sales numbers to jusify that valuation?
A: Matt Asay’s claiming about $20M in sales, but whatever the actual number is, there’s little question that it can be grown strictly through acquisition. Like MySQL tapping Sun’s client base, SpringSource would, via acquisition, gain immediate credibility and a larger addressable market.

And the addressable market, in this case, is one that commands budget. Whatever your opinion on the current status of Java the language and platform relative to competition from dynamic language, Microsoft or other competition, the fact is that the enterprise as a category has made truly massive investments in Java over the past two decades, both in infrastructure and personnel. Thus it is that Java is, within many enterprises, the strategic development platform. The Spring framework allows enterprises to embrace this, but with a more modern and developer friendly approach – kind of a best of both worlds approach.

If that doesn’t make sense, think of it this way: with this acquisition, VMware has significantly expanded the percentage of spend for traditional enterprise stacks that it can realize revenue from. And don’t underestimate here the importance of the former Covalent pieces; Tomcat’s the ultimate lightweight Java experience.

Q: One more cloud question: how does SpringSource improve VMware’s ability to deliver a Platform as a Service offering?
A: The easiest way to answer that is to examine the nature of Platform as a Service. Ultimately, PaaS is an abstraction, a veneer on top of an Infrastructure as a Service offering – what I have previously termed a fabric. This fabric obscures the underlying complexities of the hardware and software infrastructure underneath; gone is the need to worry about provisioning hardware, clustering and load balancing application servers, and so on. This is the fabric’s problem.

VMware, with but a few exceptions, has traditionally focused its efforts on technologies below the fabric; VMware can abstract the hardware, of course – that’s the point of virtualization. But it typically still presents users with the operating system, as well as the need to manage these new virtual instances.

SpringSource by no means offers a complete fabric solution to compete with, say, Google App Engine or Salesforce’s Force.com, but it does offer a capable, powerful and popular application layer compatible with a programming language that’s immensely popular within VMware’s install base. This is how Rod Johnson of SpringSource describes the potential combination in his post:

Combined with VMware’s vSphere and other cloud-enabling technologies, we can innovate in frameworks and infrastructure to deliver a joined up experience. SpringSource application frameworks, servers and management software can give the VMware platform eyes and ears throughout the stack, allowing it to apply its uniquely advanced ability to migrate workloads and manage VMs for maximum efficiency and minimal hardware resource cost.

That’s a bit optimistic in a few areas, but it’s an indication of how they see the potential combination of these technologies going forward.

Q: Optimistic how? Where do you think the combination falls short?
A: Well, neither SpringSource nor VMware is bringing hard core persistence skills to the table – the ORM compabilities notwithstanding – which makes me wonder if commercial entities like Cloudera or committers to projects like Cassandra, Drizzle, Tokyo Cabinet, or Voldemort are being eyed. Hell, maybe VMware will continue its tradition of poaching from Google and go after their database folks; too bad for them Facebook got to Mark Callaghan first.

Q: Besides the cloud technology development and integration, what do you think VMware should be focusing on assuming it closes the acquisition?
A: Tooling. When Cote and I met with SpringSource CEO Rod Johnson at OSCON a few weeks ago, one of the primary topics of discussion was the development experience. This could wind up one of the unheralded benefits of the acquisition: Rod gets the tooling story. He understands that Microsoft, again, is setting the bar for the development experience by allowing its developers to localize the cloud environment via Visual Studio. With VMware’s virtualization capabilities, the tooling story for SpringSource could get very interesting vis a vis cloud development and deployment.

Q: What about management? What do you think VMware intends to do with the Hyperic pieces?
A: I’ve heard all manner of speculation; everything from Hyperic will be decommissioned to Hyperic was the reason for the aquisition, neither of which I subscribe to. Cote’s take on it seems the most rational I’ve seen:

The last area of interest for the IT Management minded of you out there, dear readers, is Hyperic, one of the open source IT Management vendors categorized under the infamous term “The Little 4.” One would think that Hyperic could help beef up VMWare’s ambitions to become more of a management vendor than just a hyper-visor vendor. In the area of open source and standards, I wouldn’t say VMWare has a terrible or golden reputation, they’re pretty neutrally perceived – though their open source hyper-visor competitors will tell you otherwise. Their space doesn’t “require” open source in the same way that middle-ware, where SpringSource operators does.

Q: What would your concerns be for the acquisition?
A: Focus. Red Hat’s certainly proven that a platform company can pretty seamlessly integrate a middleware business, but VMware’s focus and commitments are to some extent far more broad than Red Hat’s prior to its acquisition of JBoss. The integration of SpringSource and its diverse-for-its-size businesses will present VMware with challenges in focus, but probably nothing that’s not manageable, given the typical Spring account.

Q: Who should be concerned by this acquisition?
A: Most are pointing to Red Hat as the firm most obviously impacted by this announcement, and I would tend to agree. VMware’s virtualization play is, ultimately, about disintermediating the operating system by abstracting it from the underlying hardware. SpringSource, on the other hand, abstracts the application from the operating system. By loosening the coupling at both ends of the spectrum, VMware is in some sense attempting to descrease the importance and relevance of the operating system itself. And in spite of the performance of JBoss, that’s a problem for Red Hat, far more so than the fact that VMware acquired a competitive open source stack.

Others too, from HP to IBM to Microsoft to Sun should probably be at least moderately concerned. VMware could be handled – or so it’s been said to me – when they were relegated to the thin layer between the operating system and the underlying metal, but between its growing management ambitions and its new foray into the Java middleware space, VMware represents a growing threat to some of the established enterprise vendors. Particularly because, at least in the Java space, it has very little legacy to contend with, and can thus be both nimble and aggressive in righting some of the J2EE wrongs.

Q: Having speculated that this is all for growth and for the street, how do you think they’ll appreciate the news?
A: Well, the stock’s trading lower after the news – potentially on the valuation – but I think if VMware can deliver on the short term promise, we’ll see that come back up.