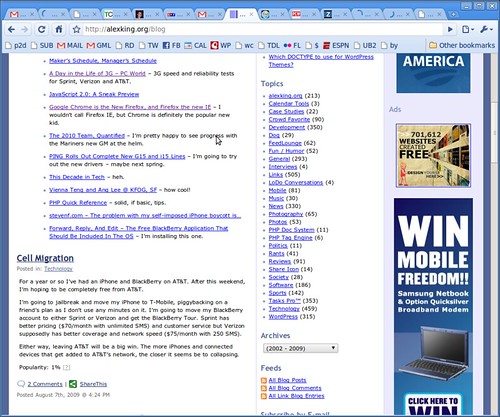 It’s been 1,916 days or about five and a quarter years, apparently, since I originally switched from Internet Explorer to Mozilla Firefox. That number should be larger, frankly, as it took me a bit longer than it should have to make the change given the relative innovation in Firefox and lackthereof in its Microsoft competition at that time, but change is never easy.

Which is probably the best explanation as to why I haven’t, like Jeremy, more actively contemplated a switch to Chromium yet. Neither I nor Alex would go so far as to cast Firefox in the IE role quite yet, but the simple fact is that – its flakiness notwithstanding – Chromium is a better browser on Linux for me than Firefox. Yes, even the 3.5 builds.

The open source version of Chrome is far from perfect; the recently enabled plugins which permit the usage of Flash and so on are regularly disabled and/or non-functional, the rendering engine still has its occasional issues, and too many poorly designed browser-sniffing sites give it a hard time. But it’s just so damned fast. And speed is not just a feature, but a feature I prioritize.

Not in the rendering. Although its from scratch V8 Javascript engine definitely gives sites like Google Docs a boost, I’ve found Firefox 3.5’s counterpart, Tracemonkey, very competitive on most sites. But that’s where the good news ends for Firefox.

In virtually every other sense, Chromium outperforms Firefox. Google’s browser launches more quickly, features snappier tab creation and – perhaps most importantly – doesn’t bog down after prolonged usage. And while the performance gains when measured might seem minute, as Jeremy says, they really add up over time. Particularly when the browser has become, over the past five years, my de facto operating system, having supplanted native applications from email clients to office productivity suites. I can’t tolerate a high latency browser any more than I can tolerate a high latency operating system; it’s just too critical to my day to day performance. Nor is migration a challenge; while you’ll have to leave your Firefox plugins behind, your bookmarks and so on are easily migrated by Chromium’s installer.

To be fair to Mozilla, the scope of these comments are the Linux builds of the product. While Chrome does appear to be faster on my Windows images than Firefox, I cannot speak authoritatively to the performance deltas on platforms other than Linux, as I have not used the products extensively enough on such platforms to comment with a high degree of confidence. But at least on Linux, I’m not alone; I’ve seen a number of my Linux using friends make the jump over the past few weeks. I haven’t yet, but I’m back and forth by the week.

As a believer that competition is generally good for technology products, I’m convinced that Chrome will ultimately be good for Firefox. But as someone who’s personally a fan of many of the people that work at Mozilla as well as the organization’s larger mission to champion an open web, I don’t enjoy delivering the news that the browser I’ve used for happily for five years is well on its way to getting a Dear John, “Why I Switched to Google Chrome” post.

But knowing the folks that work there, I’m sure they’re already aware of all of this, and already on the case.

Additional Note: Ubuntu users can get Firefox 3.5 – AKA Shiretoko – or the daily Chromium builds from the PPA here.