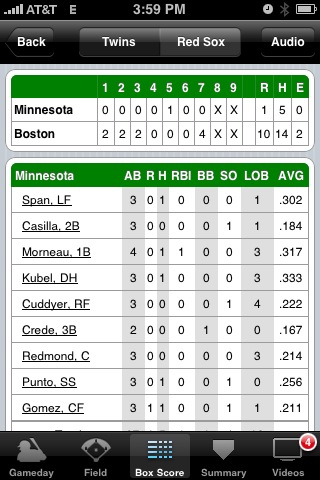 For a variety of reasons, not least the best efforts of Oracle and Sun to sink my week, the planned commentary on McKinsey’s interesting Cloud Presentation isn’t quite ready yet. Look for that tomorrow, instead. But lest I leave you bereft of my prattle, let’s go back to the well and do the rare Thursday grab bag.

If you’re new around here, the grab bag is for items that may or may not deserve their own entries, but aren’t getting them. Without further delay…

First alerted to this Y Combinator backed effort by my colleague, I have to admit that I was skeptical that BackType could deliver on its promise: pulling the FriendFeed and Twitter discussions of your content back into the entry itself. But really, it couldn’t have been simpler. Unlike some of the other plugins I’ve used in this space, no template modifications were required: it Just Works. Drop it into WordPress, activate and enable it, and you’re done.

You can see it in action on the Oracle/Sun piece from this week, which as I write this had 17 Twitter comments and one FriendFeed mention.

With the latest iteration of the Ubuntu hitting the streets this week, I made the jump last week, and I must say – Jeff’s accurate criticism of the login screen notwithstanding – Jaunty is excellent. Everything on my Thinkpad X301 works perfectly out of the box, with the exception of the AT&T WWAN which will power up but not connect to the network (my scripts still work, luckily). Suspend works flawlessly, power management works like a charm, the wifi card is supported natively, the compiz effects are applied with an eye towards usability, and the overall experience in general is just…easy. And the oft maligned notifications? I’m a fan.

Jaunty still does not come close, in my opinion, to matching the polish and eye candy of OS X, but it’s getting closer each iteration. I’ll contrast it with Windows 7 which I have installed on VirtualBox later, but for now, it’s a really nice distribution offering an excellent user experience.

Everyone I know who owns this is aware of this already, but for the iPhone owning baseball fans out there that remain unaware: MLB’s 2009 application is, quite possibly, the greatest piece of software ever written. Not that the UI is all that improved from last year’s version; apart from a few tweaks here and there, it’s pretty much the same. Nor is it more stable: if anything, it’s even more crash prone than it was before. No, the Holy Grail feature that this year’s version offers – which makes the ~$10 purchase price an absolute steal – is the gameday audio. Finally, after all these years, you can get streaming audio of both the home and away radio feeds for any game playing. And for those, like yours truly, that have been burned by MLB’s idiotic blackout rules in the past after purchasing offerings like MLB.tv, not to worry. The application’s gameday audio is blackout free, so that when I leave my car to go grocery shopping, I need not leave the game behind. You literally have the audio anywhere you have a signal, and not just 3G or wifi: it works just fine over EDGE.

This is easily the best iPhone application I’ve ever bought and the best $10 I’ve spent since I bought my lawyer our first round. Can’t recommend it highly enough for the baseball fans in the audience. I would buy an iPhone just for this application. Being able to listen to the ballgame whether I’m home in Maine or away in San Francisco? That really is priceless.

Remember when I told you a few weeks back that I secured an office in the Old Port, “pending” some “lease work?” Yeah, so that didn’t work out, as the lease I was provided was completely unacceptable for too many reasons to list. So no more office in the old port: that’s the bad news. The good news is that I’ve actually found an office just on the other side of the Franklin Arterial – a few blocks away, for unfortunates not intimately familiar with the geography of America’s Most Livable City – that’s actually superior in nearly every aspect. Thus RedMonk is still in Portland, just not quite where I’d originally expected us to be. Az and I should be settling in there next week, so if you happen to be in the neighborhood, do drop by.