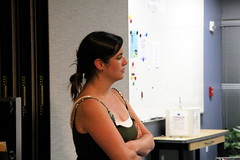 It’s been a tough few weeks on the job loss front. This morning’s inbox brought the less than wonderful news that Caterpillar was laying off twenty thousand, Home Depot seven, and Sprint Nextel eight. Last week, as many of you have seen – and asked us about – a few of the technology stalwarts that announced volume RIFs and/or planned reductions, generally in response to the challenging economic climate.

But as grim as the outlook and painful as the layoffs continue to be the reality is that the times represent an opportunity for surviving firms to acquire premium talent.

One such talent, as Ted Leung discusses, is Sara Dornsife. My description of her is simply the following: she is one of the finest community/developer marketers and social media experts that I have ever known. And given that I help run a developer-oriented analyst firm, you’d be correct in assuming that I’ve known a great many.

Sara’s done too much in her career for me to easily summarize here, but I think the thread that ties together her various efforts is her singular creativity. With many community and developer audiences essentially immune to traditional marketing and outreach techniques, the priority for those looking to engage with such audiences should be non-traditional thinkers. Which Sara is, quite demonstrably. The venue for the Best of OSCON events she threw on Sun’s behalf every year? A parking garage. Her t-shirt designs? Those word puzzles that frustrate the hell out of 11 year olds and yours truly, but are not only comprehensible but quite clever to the rest of the world’s population.

Nor is she outbound only. As one of the better Twitterers I follow – and I am hyperselective – she’s comfortable using it and other social media tools to engage with audience types in true, Cluetrain-style conversational marketing.

Many of you who know me are probably wondering right about now where the disclaimer is on this, so I promise not to disappoint: Sara is a very good friend of mine. But before you conclude that the above is more favor than an accurate reflection of her true abilities, you might want to take a look at what Tim had to say about her. Or what Wez Furlong – the PHP dev behind the PHP/DTrace probes – had to say about her events. Or maybe you’d accord more weight to her nomination for The Statesman’s Social Media Awards. Or perhaps her ringing LinkedIn endorsements.

And so on and so forth.

The opportunity in front of you is clear: if you want one of the best community/developer marketers and social media experts on the planet, I respectfully suggest that you get in touch. Quickly. Because the conversations are already rolling and she won’t last all that long.

P.S. Feel free to ping me if you’d like either a personal intro or reference.