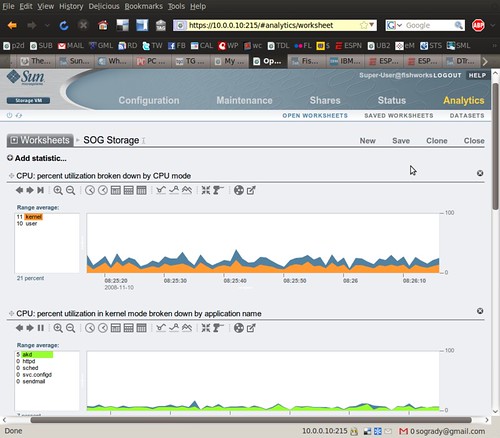 You can take it with a grain of salt, if you wish, either because Sun is a RedMonk client or because I am most certainly not a storage analyst, but Amber Road is – to me – a very interesting bit of kit. Despite being storage.

While I’ve known many and count as friends a few storage analysts, it’s candidly not a technical area that I’ve historically had much interest in. Most of my experience as a systems integrator was north of the storage tiers, and even in those days I viewed the area as unnecessarily proprietary and arcane. Much like EAI at the time, storage was the province of highly specialized resources reselling and implementing highly specialized hardware. That did considerably less than the more standardized servers we built on top of, but were instead very good at a very few things.

As a software analyst, I always found it odd that storage bucked the trends towards commoditized hardware and software that had reshaped the server and software markets before it, because therein lay opportunity. Or so it seemed to me.

And while there are doubtless other storage entries that harbor similar ambitions of commoditizing a field of technology that has yet to (really) weather that storm, Sun’s just announced Amber Road gear is the first mainstream entry that I’m aware of.

The history of the project, if you’re interested in such things, is detailed by two of its primary authors, Bryan and Mike, in entries posted today. Ted and Tim, for their part, related their own personal experiences with and views of the project.

My own exposure to the software that was Fishworks (the software side of Amber Road, which stands for Fully Integrated Software and Hardware..er, works) came some time after the initial approval was given and the secret, startup-like space was procured. How long after is not immediately available, either because it was prior to my last email migration or because my invite over to the office was too secret for email. Or both.

Either way, I had been curious as to what the inventors of DTrace intended as a follow up act, and – surprise! – it involved DTrace. Also, ZFS. I didn’t expect the heavy Javascript on the front end, necessarily, though that made a lot more sense once I learned that the Firefox Javascript interpreter had been DTrace-d, creating Helpermonkey (which Bryan was kind enough to show off at RedMonkOne two years back).

What was truly surprising, to me, was that I found the project interesting. This was storage, after all; an area that I avoided at all costs. But this was a storage system that I could relate to, one that I wanted to talk about…but couldn’t, as I was on double secret probation. Until today, and the official launch of what, collectively, is unofficially referred to as Amber Road and officially as the (boring) Sun Storage 7000 series. As Bryan put it, now the story can be told.

I won’t detail here the product specifics, except to note the cool fish codenames (Iwashim Fugu, and Toro) that echo The Simpsons; first because I am not, you’ll recall, a storage analyst, and second because El Reg has the details for you here.

Instead, I’d rather talk about the three things that make Amber Road interesting to me.

As mentioned above, I’ve always considered the storage market – like the networking market – kind of weird. Why should one portion of a hardware market be profoundly altered by the forces of commoditization and open source, while the boxes sitting right next to them remained immune.

The answer was, they shouldn’t. And won’t, frankly, whether or not Amber Road is successful. Both commodity hardware and open source were coming to the storage market sooner or later, and both have arrived in these appliances.

The hardware itself, with the possible exception of the Flash drives, is pretty basic fare. All I can say is: finally. Who hasn’t had enough of proprietary boards, backplanes and so on? Tying it all together, and potentially differentiating the offering, is the open source foundation, which includes DTrace (analytics and instrumentation) and ZFS (storage pooling).

I would have applauded the arrival of commodity gear and open source into the storage market in any event, but I happen to think that the combination in Amber Road is particularly compelling.

If you follow the operating system markets at all, you’ve undoubtedly heard of these two technologies; depending on your role, in fact, you may be tired of hearing about them. Be that as it may, however, the fact is that these two technologies, introduced in Solaris 10, have yet to be equaled by commercial alternatives. SystemTap, Linux’s alternative to DTrace, is not ready for prime time, and neither are Ext4 nor BTRFS – the Linux answers to ZFS.

But while the general purpose operating system selection process is about more than kernel observability and next generation filesystems, those two technologies in particular are put to good use in Sun’s new storage appliances.

DTrace is employed to provide some eye catching yet substantive analytics. If you can think of a question related to storage analytics, it’s probably in there somewhere: IOPS, protocols, clients, files, whatever you want to know, just ask. The information is available because of the visibility that DTrace has of running, production systems. Put differently, it’s leveraging the observability as a regular, mainstream production feature, rather than a mere debugging tool. Which is interesting, I think.

As is the usage of ZFS, which is employed as the binding agent for a number of distinct devices that have little in common. Until they form a hybrid storage pool, that is. Speaking of…

Flash is the new disk, I’ve heard it said more than once. But even with costs down 50-70% per annum, it’s still not economical – or wise, given the lack of history for the devices – to construct storage infrastructures purely from Flash and RAM. But to not leverage them at all, and to rely entirely on disks means that customers can’t realize any of the advantages Flash can offer. Far better, it would seem, to architect a product that leverages the strengths of both Flash and disk, while mitigating their respective weaknesses. Enter the hybrid storage pool.

As Adam discusses, and Mike and I talk about on a San Francisco street (replete with very loud buses), the so-called hybrid storage pool is a collection of RAM, Flash (in both read and write optimized varieties) and lower speed 7200 RPM disks pooled via the ZFS filesystem technology from Solaris.

When pooled this way, Sun argues that the resulting hybrid pool will be at least as performant as (if not faster than) alternatives, while consuming less power. And, of course, costing less money. While I’ll wait for both customer verification on some of these same claims, as well as some independent benchmarking, on paper the appliance seems to be the best of a couple of worlds.

What Does It All Mean?

We’ll see. Clearly, a new storage product by itself is not the cure for all that ails Sun.

But this is the most significant product launch I’ve seen from Sun in a long while, because it applies an open source set of technologies to a commodity base, creating a differentiated whole that is aimed at a market that hasn’t seen enough of either commoditization or open source. All of which is good, if you’re Sun.

The primary question for me, however, is not whether these products will find a market, but rather how quickly, and which one? Storage, after all, is a strange market. In my experience with storage procurement, it’s a strategic play in a way that even servers might not be. Workloads can be migrated, particularly with the advent of live migration virtualization technologies. But hundreds of terabytes or petabytes of data are a different matter; they can’t be easily or quickly moved, they must be protected both in place and in transit, and they need to be accessible.

Meaning that at least initially, I expect Sun’s appliances to perform better in greenfield than in consolidation or swapout scenarios. But when wasn’t that the case with technology?

The ultimate reality of this market to me, however, recession or no recession, is that data volumes are expanding exponentially. And once the telemetry wave kicks in, in both the consumer and enterprise spaces, we’re all going to need more storage. With Amber Road, Sun is much better positioned to take advantage of that than they were prior to its introduction. How much better is now in the hands of the sales team, as the engineering side seems to have done their job well, from where I sit. According to the Journal, Forrester disagrees.

I guess we’ll see who’s right. Either way, it’s nice to – finally – be able to talk about this publicly. Been a long time coming.

P.S. Oh, and one last note: I’m not sure whose idea it was to provide a VMware image of the appliance, but that was much appreciated. The registration process is still a pain in the ass, but being able to fire up an appliance and see the analytics pieces firsthand in VMware Player was nice.