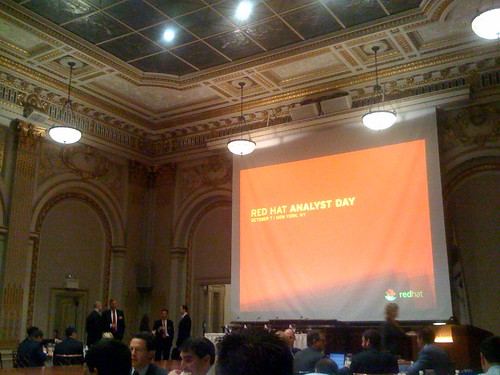 We each behave according to our nature. It should come as no surprise, then, to learn that while a virtualization supplier believes that the operating system is, effectively, a feature, an operating system vendor would argue that the converse is true. The philosophical differences between Red Hat and VMware could not have been more apparent during their respective events – September’s VMworld gathering in Las Vegas and yesterday’s Red Hat analyst day held at the New York Stock Exchange.

VMware’s perfect world, as described at VMworld, would see the operating systems disintermediated and subordinated to the virtualization platform, which would become a platform in the Microsoft sense of that word. Red Hat, on the other hand, primarily messages enterprise grade platforms, constructed upon an open source development model, that are eminently capable of and/or friendly to virtualization. In Red Hat’s words, “We won’t be talking about hypervisors in a year or two, it’ll just be a feature of the operating system…The hypervisor only guys have to become an operating system if they’re to be successful.”

While it might seem as if these two views would be fundamentally incompatible, they are not. At least in the technical sense. RHEL will happily run VMware, and vice versa. Indeed, customers of one are like as not to be customers of the other, at least in certain market segments. But make no mistake, in terms of their strategic footprint and relevance, Red Hat and VMware’s ambitions overlap considerably.

Asked, yesterday, which view I subscribed to, I (predictably) equivocated. Much depends on the primacy of virtualization within the particular customer segment you happen to be curious about. For customers that heavily leverage virtualization as a strategic enabler, VMware’s perspective will be the most relevant, because of their feature/function superiority and management capability head start. For customers, on the other hand, who work backwards from applications or specific business requirements that are platform dependent, the operating system is the more pressing concern because of questions around compatibility, performance, resources and so on.

Ultimately which way you lean is likely to be determined by your answer to this simple question: do operating systems matter? We know, both from public statements and the past pushing of virtual appliances, what VMware thinks. And it’s probably not hard to guess what Red Hat thinks, given that they are the dominant supplier by marketshare of Linux to the commercial marketplace.

From my past answers to that question, you might conclude that I’m more inclined to see things Red Hat’s way. A conclusion that is mostly true.

Until such time as VMware is able to divorce the application development process – and more importantly the task of supporting the output of that development process – from the operating system itself, the latter will matter. Which is not to dismiss either the importance of VMware’s technology or their still dominant position in the marketplace. I just cannot agree with VMware CEO Paul Maritz when he says “the traditional operating system has all but disappeared.” Certainly Red Hat’s financials belies this claim, as do Microsoft’s though the mint that is Office complicates matters.

Like Winston Churchill’s democracy, the idea of the general purpose OS is the worst except for all the others that have been tried. There are a multitude of advantages to highly customized operating systems, as Google’s subsecond latency proves daily. But the cost is high: high enough, in fact, that economics have dictated the technically inferior approach of the general purpose operating system. Like a Swiss Army knife, or the jack of all trades, it may be the master of none, but it is unquestionably the dominant form of computing at the current time. And as discussed above, unless application development and support processes change monumentally, it will be for the foreseeable future.

Which is an exceedingly long winded means of explaining why I think Red Hat is important, rather than an account of yesterday’s agenda. I’m not entirely sure that VMware was mentioned at all, in fact. For those interested in what Red Hat had to say yesterday, here are some brief comments and notes.

On the Business Model

On the Customer Portfolio

On the Financial Crisis