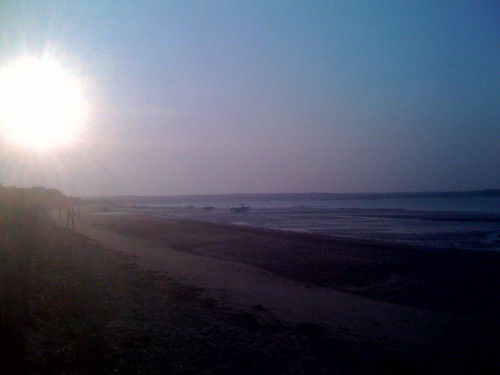 What I did on the Day Two of my vacation: visited an oyster farm in Wellfleet, MA. For serious. These sustainable – “call it green, sustainable, whatever you want” said one oyster farmer today – shellfish fisheries are an interesting canary in the coal mine in several respects. As we’ll see.

And while I’m aware of the concerns with respect to other farmed marine life – see, for example, the concerns regarding farmed salmon here – the oyster beds seem to be remarkably low impact, both in terms of usage and their effect on the ecosystems they inhabit.

Anyway, after listening to an interview of oyster aquaculturists and charter fishermen today, here are five things I learned.

The above data suggests, to me, certain conclusions:

Whether all of the above is good or bad depends, of course, on your perspective. Personally, I’m not against the changes precipitated by the rising cost of oil, but the transition is likely to be excruciating for marine communities.

None of us are guaranteed a living, as my Mom always said, but efforts need to be made to assist those subsisting off coastal harvests if families are not to go hungry.