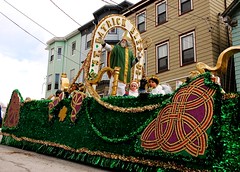 Not everyone’s lucky enough to be in Southie for the St Patrick’s day parade, it’s true. Which is a shame, because outside of Ireland, there are few areas more fiercely proud of their heritage and last names than my old neighborhood. This mural, painted onto the side of a liquor store two blocks from where I used to live, is pretty much par for the course.

But that doesn’t mean that you can’t celebrate wherever you happen to find yourself tomorrow. Sure, you’re probably not lucky enough to be afflicted gifted with an apostrophe in your last name, as I am, but no matter: we’re an inclusive people, and would be happy to bring you up to speed.

Here’s what you rookies need to know about St Patrick’s Day:

Beer’s going to be easiest. Acceptable selections include: Guinness, Harp, Murphy’s Stout/Amber, or Smithwick’s. A couple of important points:

If you feel compelled – either by nationalistic pride, peer pressure or a general lack of intelligence – to go for shots, Bushmills, Jameson or Powers are the usual Irish whiskeys consumed. Maybe Tullamore Dew, though that tastes like paint thinner as far as I remember.

See at least if they have something aged, like Jameson 1780 or – better – Bushmills 21; it may still taste rough, but it’ll go down much easier and hurt you (a lot) less later. There’s a reason I’ve regifted all of the bottles of regular Jameson I’ve been given over the years.

I have to explain this to people every year, but it’s good news so I don’t mind: corned beef and cabbage, which I personally think is a truly awful combination of items, is NOT a traditional Irish meal. If someone tries to convince you to eat this because it’s “Irish,” they’re either misinformed or trying to trick you. Either way, lose them.

If you want to go for the gusto and aim for traditional Irish fare, your best bet is some brown soda bread and a stew or thick soup. Otherwise, potato based dishes like boxty or colcannon are reasonably authentic because, well, we’ve always had a lot of potatoes.

Honestly, though, we tend to put a lot more thought into our drink then our food, so you might as well eat whatever’s at hand.

Where to Eat and Drink

I’ll answer this one with a question: are you living in a town that has more Irish pubs than schools and libraries combined, like Boston? Or a town whose idea of Irish is Killian’s and one of those Leprachaun signs bought in the middle aisle of a grocery store like Denver? If it’s the former, simply pick the most convenient Irish establishment to your home (try to avoid driving) and enjoy. If it’s the latter, you should have already spoken with – as I have – the staff at one of the few Irish establishments in question to determine what time you need to get there to get in. If you didn’t, well, what were you thinking? I mean, honestly.

When to Eat and Drink

Because St Patrick’s day is a bit more alcohol oriented than, say, Earth Day, it tends to be dominated – particularly later in the evening – with people unfamiliar with the effects of alcohol. If at all possible, I recommend conducting your celebrating as you would a surgical strike: get in early, before anyone suspects anything, and then get out before all hell breaks loose and every third person is being hoisted in a fireman’s carry.

What to Listen To While You’re Eating and Drinking

The following playlist has served me well for several years now (‘05, ‘06, and ‘07) so I don’t see why it won’t do you fine. If you’re light in the Irish music category in iTunes, eMusic has you covered: they’ve got everything you could want. Or, for a few grand, I’ll put my phone here on speaker and you can simply listen in to what I’m playing. Which will be something like this:

(as for artists, I recommend Makem and Clancy, but the Dubliners, Chieftains and others do very capable renditions of all of the tracks below)

For those of you looking for extra credit, I highly, highly recommend Edward O’Connor‘s Irish History in Song series. It’s excellent, and I learn something new every year.

What to Wear While You’re Eating and Drinking

Something green, I think. Though apparently the answer was once blue, which I hadn’t known. To be honest, my attention to the dress aspect of St Patrick’s day is only slightly better than that I devote to dress generally. The only thing you absolutely cannot wear is orange. Particularly in Southie; just trust me on this one.

How Long To Eat and Drink

Have fun, enjoy yourself, but above all: do not drink and drive. Under any circumstances.

My thanks to presley for the CC licensed St Patrick’s Day Parade shot.