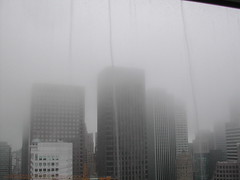 San Francisco. Seriously. I know, I can’t believe it either. I’m only there two dozen times a year. So much that an apartment would be far more economical than all the hotels.

Well, maybe not. It is San Francisco, after all.

Anyway, after breezing through the seamless CLEAR security procedure, I’ll be arriving in San Francisco late afternoon in anticipation of Friday’s dtrace.conf(08) event. Which should be excellent, though I’m told not to anticipate stickers like the SystemTap guys have. Maybe I should cancel.

Plans are not set in stone for tomorrow night, though it’s possible that I’m booked, so if you’re in the area feel free to drop me a line. Odds are strong to quite strong that I’ll end up at the House of Shields at some point anyway, so you might look for me there. That, or down near the Marina where a buddy of mine lives.

Or if school nights aren’t your thing, I’m sticking around for Friday evening as well, though there are some planned festivities so I may be somewhat occupied.

Either way, I’m out of the office tomorrow and Friday, and Monday – well, you know I’m offline then, don’t you? The 17th of March? Some Irish holiday? Yeah, that one.