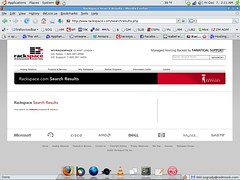 No VMWare from Rackspace

That was one month ago today. Buried under the above news was word that the latest rev of RHEL included Xen 3.1, capable of – among other tricks – live migration. The kind of thing, in other words, that customers typically pay VMWare for.

As Red Hat and other vendors seek to encroach on VMWare’s territory using Xen, KVM and a variety of other open source tools, the virtualization giant will be pushed to seek opportunities to differentiate and innovate. While the Xen release is not comparable with VMWare on a feature/function basis, there’s little debate that the technology is maturing rapidly and becoming a more viable option for real production workloads. Or don’t you think EC2 qualifies as a real production workloads?

Regardless of what you think of it, Amazon’s cloud computing platform is both differentiated and innovative. To the extent that I think that eventually VMWare will be forced to respond, partner, or both.

The shortest distance between VMWare today and a VMWare with a credible cloud story is, in fact, Amazon. Witness technologies such as Enomalism’s VMWare to AMI migration toolset. Could VMWare partner with Amazon, then, and permit VMWare customers to seamlessly deploy their VMWare images within Amazon’s datacenter? Sure, they could. VMWare users would probably be pleased; I know I would.

Such a scenario seems unlikely, however. EC2 is as alluded to above a platform based on Xen, a technology that represents a clear and present danger to VMWare’s own virtualization portfolio. It is unlikely in the extreme that VMWare would be well pleased by the prospect of seeing their workloads being deployed and run on a platform powered by a competitive virtualization technology.

But what is the alternative? Hosted VMWare, in all likelihood. Announced in June, its Virtualization Service Provider Program (VSPP) is intended to bring VMWare virtualization to the cloud, the idea being to make VMWare a viable option for the same audience that might run RHEL on EC2. Which makes the $64,000 question this: will that be enough to compete with Amazon’s platform?

Acknowledging up front that six months is not enough time to judge the longer term potential of VMWare’s outreach to hosting providers, I suspect the answer will be no. Not least because they are hosting providers.

Dismissive as traditional hosts tend to be of Amazon’s entry into their market, the fact remains that EC2 and S3 have significant advantages in cost, friction, and billing logistics over legacy hosted offerings. Meaning that VMWare’s chosen partners are disadvantaged versus Amazon in certain use cases. Add to that the traditional limitations of a partner led approach: fragmentation, an overabundance of choice, and most damningly a lack of a symmetrical commitment. Rackspace, as an example, is one of VMWare’s cited VSPP partners, and yet a search of VMWare of their site turns up nothing.

Eventually, we’re going to see more competitors to Amazon’s cloud based platform, whether it’s from traditional hosts seeking to close the gap or from larger players like eBay, Google, Microsoft or Yahoo following in Amazon’s footsteps with regard to making available their infrastructure and the economies of scale that built them. It’s even conceivable that VMWare itself could be the technology that enables a traditional host to make the leap, much as Xen permitted the creation of EC2.

Either way, I’m a firm believer that VMWare should be investing and investing heavily in cloud computing strategies and partnerships. Not – or at least not strictly – because its competitors are, but rather because its customers will eventually demand it. The good news is that the virtualization technologies required to deliver on the vision of seamlessly migrating workloads to remote infrastructures are largely available. The bad news is that finding an infrastructure capable of implementing them at an Amazon type scale is a non-trivial endeavor.

Disclosure: Neither VMWare nor Amazon or Red Hat are RedMonk clients.