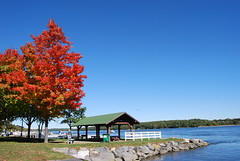 Saturday afternoon, halfway up the Sasanoa almost through to the Kennebec I was forced to finally admit that summer’s over. Mostly because I was cold. Also because the primary purpose of the trip was to put the boat up for the winter. This red tree didn’t hurt, either.

Though I’m still East, those days are fast nearing an end, what with my Red Sox down to Michael Dolan’s Indians 3 games to 1 in the ALCS (let’s not talk about it). Though travel complications are – again – going to put off my return by a week or two, I’ll be making my way back to my erstwhile home shortly – second week of November at the latest. It could very well be that by the time I get back, the Rockies are World Series Champions – who would have figured?

In the meantime, I’m flying out of Vegas tomorrow morning, but not returning to Maine. Instead, I’m headed to Austin, where I’ll be through Friday. You know where to get me in the meantime.