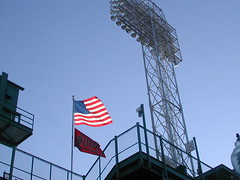 Been Waiting a Lifetime for the Lower Flag

I never said that a daily outlook hinging on the performance of a baseball team was logical, let alone advisable. Such a statement would laughably naive, I think, in its implication that choice is somehow involved.

I could no more choose to not care about the Red Sox than I could choose to be a foot taller. Yes, I’m serious. No, that’s not hyperbole. For better or for worse, richer or poorer, in good times and in bad, this is my team.

The negatives of this approach were made manifest this past week or ten days, as Boston continued to squander a once sizable divisional lead to the Yankees in about as excruciating a fashion as can be imagined.

Hard fought losses that just don’t go your way are one thing; they’re painful, but in the way that getting a shot hurts. Instead, we got our teeth kicked in night after night after night. Which wouldn’t be so bad, except for the fact the Yankees, playing their usual part of bad villain to the hilt, not only refused to die but seemed pathologically unable to lose a game. It was as if they were protected from on high by the Prince of Darkness, just like Keyser Soze.

And to add injury to insult, guys were dropping like flies. Okajima, the league’s best setup man all season? Shut down indefinitely with a dead arm. Manny Ramirez, up until this season the game’s second or third best right handed hitter? Also out indefinitely with an oblique strain. Kevin Youkilis, he of the Moneyball fame? Drilled in the wrist, out – you guessed it – indefinitely. Big Papi? Well, just watch him swing the bat. You remember on the Family Guy, when they did a spoof of the Bionic Man, saying “we can rebuild him, we have the technology – but I don’t want to spend a lot of money” and put Peter Griffin back together using a combination of garbage cans and rakes? That’s Ortiz right now. His shoulder’s needed a cortisone shot, his knee is periodically giving way, the man is hurting. Stretch run acquisition Eric Gagne? Damaged goods. I don’t know whether it’s mental, physical, or both, but it all comes out the same. And the list goes on – see Crisp, Coco.

Put simply, if at this stage of the season you can say that JD Drew is your healthiest player it’s safe to say you have serious problems.

Things were so low at one point that I took a four day hiatus from reading either the Boston Globe or Buster Olney over at ESPN. While this may seem inconsequential in the grand scheme of things, I can assure you that in my world that is positively unheard of. I’d be willing to bet that the last time I went four days without reading the Globe Sports Page was before college. Try to imagine not visiting Google for four days and you might get a sense of what I mean.

Lest you think that this confession is merely an indictment of my own questionable mental health, I’ll point you to the fact that when this week’s travel schedule afforded me the opportunity to have both lunch with DeWitt and beers with Adam, Mike, and my recently transplanted friend Brady, each expressed similar sentiments. In differing measures, of course, but I wasn’t alone in my mood.

Which is, of course, one of the less obvious benefits to being a fan – the way it brings people together and gives them common cause. In this day and age, that’s a rare thing, a valuable thing.

Far more enjoyable than commiserating together, however, is celebrating together. Which is what we may do after tonight, because it can’t rain every day. With the combination of a come from behind Red Sox win and the Tigers losing, the Red Sox have officially clinched a spot in the postseason, and guaranteed the great State of Maine another few weeks of revenue out of this temporary resident.

The AL East pennant, of course, is still very much up in the air, but truth be known it means little beyond bragging rights. If there’s one thing the baseball postseason can teach us, it’s that pretty much everything goes out the window. As I told a couple of people this week, last year I picked every single series in every single round in both the AL and NL wrong. Every one. Now I may not be the sharpest tack in the box, but I do know a little about the sport, so that total failure of prognostication should tell you something.

Besides, the last I checked, the winners of the 2004 World Series didn’t win their division.

Given the crapshoot nature of the postseason, then, I’m more than willing to overlook the negative to focus on the positive: after tonight, we have a one in eight chance at winning this thing. And that’s all any of us can ask for.

I’d like to say thank you, then, to the 2007 Red Sox. Whatever happens going forward, it’s been a great summer – this past week notwithstanding. I look forward to conveying my sentiments and continued good luck to the team in person this upcoming Wednesday evening, and you folks should anticipate some disruption in my schedule the next few weeks as I plan around a new schedule.