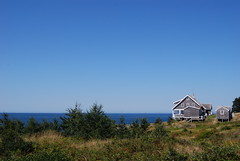 I Could Live Here

Another vacation, another Maine island. I wouldn’t want to disappoint, after all.

Monhegan Island, as Wikipedia dutifully informs, is not the world’s second largest casino but a rocky outcropping located about 12 miles off the coast. Though my judgement has been known to be faulty, I count it as some of the best scenery in the state. Which, given that it’s Maine we’re talking about, is saying something. Fortunately, you don’t have to take my word for it, as you may judge for yourself – after taking into account the lack of skill on the part of the photographer.

It’s been almost a decade since I was last here – accompanied by a soon-to-be ex-girlfriend, in fact – but little has changed since that ill-fated visit. The year round population still hovers on the south side of 100, and the views are…well, you’ll see. Monhegan’s the most overambitious island ever; you have, of course, the traditional rocky coast, almost savannah like meadows, and towering pine forests – all crammed onto a tiny little island.

Transport? You can get there from here, as it happens. So long as you don’t mind boats. Ferries depart from Boothbay Harbor and Port Clyde daily in the summer, but unlike the ferry to Peak’s no cars are permitted. If you’re leaving from Boothbay, a roundtrip ticket will run you $32, and I highly recommend not parking at the wharf itself or you’ll be out another $15.

One very important note: if you have a small bladder, go before you get on the boat. Water’s scarce on island, but public restrooms are even scarcer. Word to the wise.

The ride out is a short hour and a half, at which point you’re disgorged on the town pier with no guidance whatsoever. Your first move should be to acquire a map – they’re available at the top of the wharf for a buck. From there, you have several choices, which depend on a.) your desired exertion level, b.) whether or not you’re staying overnight, and c.) how long you’re likely to linger over the scenery.

If you’re up to some manageable hiking (there’s one stretch where you’ll have to scamble a bit), the climb up the unfortunately named White Head affords some very nice panoramic views. If you’re more of an ambler, head south to Lobster Cove and take in what merciful Poseidon was able to do to the tug D.T. Sheridan, launched 1939 out of Brooklyn and grounded November 1948.

The same kids that are bored by Wyeth-like seascapes are likely to find Cathedral Forest substantially more entertaining, if only because they can dabble in the fairy real estate market. Some of the “Fairy Houses” are quite elaborate, and it’s interesting to see how creative children and their parents can be with the limited materials available at their disposal – think pinecones, bark, and twigs.

Alternately, you can hit all of the above in a circuit, as I did yesterday. If you don’t stop to see anything, you can circuit the entire island in the half day you have before the return boat departs. But as you’re there to see the island, it might make sense to do just that. Try the half island plan instead; south to Lobster Cove, east to Gull Rock, north to Squeaker Cove, and then west back to the village. If you time it right, you can grab a quick lunch before the boat gets there (~2:30ish for the Boothbay boat).

You’re welcome to grab a seat in one of the restaurants, but I was happy to grab a sandwich and a PBR in the market, then sit by Swim Beach watching kayakers paddle aimlessly and a Cessna circle overhead.

Other items worth mentioning:

All in all, Monhegan’s an excellent day trip at worst, and a quiet weekend getaway provided that you’re ok with iffy toilets and an overabundance of the artistically inclined. Well worth the visit, in my book.