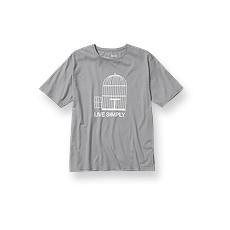 As teachers go, this Patagonia t-shirt is probably the most taciturn that I’ve seen. The simple two word mandate, however, resonated with me like a tuning fork. In spite of the fact that I typically have little patience for preachy gear: those “Life is Good” tire covers push me to the brink.

To preemptively answer your first question: no, I’m not trading in my material possessions for orange robes and sandals. There are still some few things that I want, and fewer still that I need. What a summer of introspection has afforded me, however, is an opportunity to rethink that fine line. To reassess all that is currently considered necessary, and to dispatch some that is determined not to be.

Persuasive as the shirt was, it was also preaching to the converted. Or partially converted, if you prefer. Even my most ardent critics (think ex-girlfriends) would admit, I think, that I’m not a tremendously complicated individual. What you see is usually what you get. My interests are few, if obsessively followed (ahem). Nor – apart from computers that I spend a great deal of time working on – am I overly occupied with material possessions.

Even so, Paul Graham is right: like everyone else, I’ve got too much stuff. In case the point was up for debate, I’ve survived for a summer with access to but a car’s worth of my own gear: a single duffel bag of clothes (explains a lot, doesn’t it?), a few computers (only one of which I use heavily), and my fishing gear (lord knows I haven’t need this). The first thing I plan to do upon returning to Denver, then, is divesting myself of whatever material goods I can do without. Clothes to goodwill, unused computers repurposed and rehomed, boxes of junk sent to wherever junk goes, and various other redundancies (including my home theater system?) to Craigslist. The books alone will survive unmolested.

I have no intention of turning into one of those unhappy millionaires of Sillicon Valley, although I wouldn’t mind turning into a happy millionaire who splits time between Denver and Maine. Many will read that article to emerge disgusted with the absurdity of their “plight,” but I lived in New York City after my graduation and saw firsthand how similar peer pressures reshaped good friends of mine. Often dramatically. My own inertia seemed to grant me something of an immunity; dressing nicely takes work, after all.

Several years ago, I happened across a copy of Westchester Magazine at an IBM conference, and it detailed one of the most ridiculous cases of keeping up with the Jones’ I’ve ever heard. A housewife, intent on retaining their home’s title as largest in the neighborhood, actually visited city hall to get copies of the plans for a neighbor’s addition: and promptly built her own 25 sq feet bigger.

Point is, people are crazy. Or can be, given the opportunity.

Keeping it simple, of course, is not a 100% effective vaccine for the green disease. Nor is the simple dictum likely to be of much assistance in navigating a world populated by an exponentially growing volume of stuff.

But simple’s worked all right for me thus far, and I think it’ll keep me happier as I work towards the things I “need”: a place on the water and a boat. With those two things, I think I could live very simply indeed.