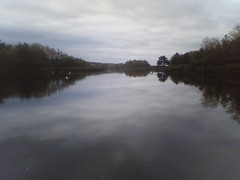 All’s Quiet at the Cove

After the hail, things got better. Not a lot better, at least not right away, but better. But let me back up.

Friday morning dawned early as expected, as I rolled out of bed (almost literally after I got tangled up in a nest of fleece blankets) a bit after three. That part wasn’t a mistake. My error was instead rolling out of the driveway towards Boston ten or fifteen minutes before four, not bothering to check on my buddy’s flight until I’d hit the New Hampshire border. Instead of 5:20, as originally scheduled, his flight was now arriving at 6:50. Another hour plus I could have been sleeping. And yes, said the JetBlue customer service rep, she was sure that it was not, in fact, an error. No matter how many times she looked.

Paying Logan’s parking fees held little appeal, so instead I pulled into a grocery store parking lot off Rt-60 somewhere in Revere and slept for an hour or so. Eventually, the flight arrived, traffic was fought, and we were en route back to Maine. Nothing remarkable happened en route.

Or, for that matter, in our initial fishing foray which began 10 minutes or so after we got back to the compound. After striking out for about an hour, we decided that better intelligence regarding the elusive striper was in order along with some lunch, and headed into town. We stocked up on food at Mae’s (formerly Kristina’s, for those of you with knowledge of the Bath area), beer at Shaw’s, and flys, leaders and intel at the Kennebec Angler. Thus provisioned, we made for Georgetown.

Five minutes from the house, it started to rain. Two minutes from the house it started to pour. As I pulled into the driveway, it started to hail. Not small, particulate hail – the big, golfball style stuff that you’re worried will take the finish off your car. My initial plan – to weather the worst of the hail in the car before proceeding inside – was made impractical by the fact that at least two of the cove facing windows had been left open (there being neither torrential rain nor hail when we’d left). So instead I sprinted for the door, found it locked, got pelted with sizable chunks of ice from the sky and eventually got inside to find puddles forming under the windows. Those easily and satisfactorily addressed with the application of beach towels, we sat back to wait. To the suprise of no one, cards came out.

While the worst of the storm – meaning the hail – blew on by eventually, the rain never really did. But my friend had flown all the way out from Denver to fish, so with the thunder and lightning seemingly following its close friend the hail to the east out to sea, we began to fish. First on the dock, and then – seeing rises all over the cove just out of our reach – from the boat. And caught nothing. You’d have thought the bugs wouldn’t have been bad, because of the rain, but for reasons I’ll leave to someone else to explain, that just makes them worse. After fishing up and down the cove for a few hours and getting low on gas, we headed back for the dock. Dinner was down in Brunswick, and the day closed out with The Forty Year Old Virgin (one of my favorite comedies of the last several years).

Saturday’s original plan: greet the rising sun – and hopefully fish – at four AM died quickly once I heard a muffled “I’m going back to bed” from the other room. Next thing we knew it was nine and time to head back to the Kennebec Angler to try and determine what – precisely – we were doing wrong. Not much, apparently. We were fishing the right flys, in mostly the right places, with the right lines. Other suggestions were provided, charts were consulted, and plans made.

After putting thirty bucks of gas into the boat and hearing it top off, it knocked the gauge from just under a quarter tank to just over. Must be a mistake, we thought. So it was up the Sasanoa, through the Lower and Upper Hells Gates, and out into the Kennebec. There, we fished everywhere. The front and back of Lee Island. The flats in and around the Back River that cuts Georgetown – our island – off from Arrowsic – our connecting island. Knubble Bay. Hockomock Bay. Squirrel Point. The net? You’ve probably already guessed. Zero fish. Worse, not even a single strike. We saw fish. Plenty of them, in fact. We saw the gulls that can indicate fish. And we heard the fish. I can hear them outside as I write this, in fact (damn them). It was catching them that proved to be the problem. Oh yeah – and the gas.

Apparently the gas gauge had not, in fact, been lying. After we gave up on the Back River flats, I turned the engine on to see it reading a hair over empty on the gauge. Far from home. So back up the river we went following, randomly, the Sea Tow boat (the marine equivalent of a tow truck). Against all odds, we made it back to our dock with no tow or assistance required. And fished some more. Then dinner, then Casino Royale.

Sunday’s planned four AM fishing expedition failed for more or less the same reason as Saturday’s; fatigue coupled with a fundamental lack of incentive. My buddy gamely tried off the dock for an hour or so later that morning, and then even he – the same guy who dragged us through frozen streams in Rocky Mountain National park in September – gave up, defeated. In the three days we’d fished, we’d thrown literally every fly I have at the water, with no success whatsoever. It got so bad, we began picking flies not by probability of success, but by which looked new and therefore hadn’t been tried yet.

Fishing, then, being nothing but frustrating, a new activity was in order. With the Maine weather finally showing its nice side (70’s and a couple of clouds), some wiffle ball seemed appropriate. For those of you who remember wiffle ball as something you played in the back yard as kids, it’s worth mentioning that we take it slightly more seriously (I’ve been trying to persuade doctor acquaintances for years to give me elective Tommy John surgery in the hopes that I’ll come back throwing harder). For those of you completely unfamiliar with wiffleball (webmink’s probably in that camp), Wikipedia’s got your back here. How did that go? Well, first, I gave up more runs in this start than I have in any previous outing. Ever. All 8 of the runs were given up in a single, Dice-K like wild inning, but they still count. Couple of walks, couple of doubles, two triples (barely fair), and that was the ballgame. Second, I stranded around a dozen baserunners, plating none. No runs makes it tough to win. Third, I tripped running up a slight hill going after a pop up and almost fractured my skull on a rock blown into the yard by the blasting for the foundation. Fourth, well…there is no fourth. I just got throttled. The only thing that went right was that my control was fine when it came to hitting the batter (wiffle balls are hollow plastic and sting when you’re hit, but do no serious damage). I couldn’t hit the strike zone to save my life, but throwing high and tight or in on the ribs was not a problem.

Soon after it was time to head back to the airport.

Summing up, the vacation in review: several fishing trips, zero fish, one massive hail storm, two round trips to Boston, and an absolute bludgeoning in wiffle. Sounds ugly. But ask me how my vacation was, and you won’t hear me say anything but “outstanding.” You know you’ve done well picking friends when you can laugh through a shutout of a fishing trip and weather straight out of the Deadliest Catch. And really, is there anything more you can ask for from a vacation than laughter and good people?