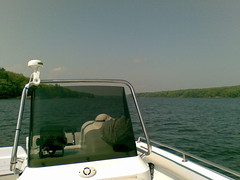 So things weren’t perfect. The suntan lotion I’d bought turned out to be banana scented, the Downeaster ran on a weekend schedule denying me a chance to attend today’s Sox game (which marked Trot’s return to Fenway), and it clouded up and rained a bit late Sunday. I still have 20 bucks that says that this Memorial Day weekend here in Maine ranks up there with the best ever.

Things looked grim Friday afternoon, as I returned from a midday visit to BFC Marine uncertain as to whether I’d get the boat that day or not to find the power knocked out. But as you may have gathered via my Flickr or Twitter streams, those were temporary setbacks.

First, power to our little corner of the world got restored a few hours later. Then, the boat arrived up in Bath Friday night around 7, and I beat a setting red sun driving it home to Georgetown shortly thereafter. The weekend guests, for their part, rolled into town considerably later – a bit after 2 AM.

Saturday featured a couple of clouds, temperatures in the high 70’s, and – to my surprise and delight – virtually no bugs. Mae’s in Bath stuffed us full of brunch, and then we killed the better a big portion of the day taking the boat down the Kennebec and out into the big bad Atlantic ocean. For dinner, we grilled up some corn and turkey burgers, which was not terribly challenging. Higher on the degree of difficulty scale was the preparation of the lobsters, given that none of us had ever cooked them before. As an aside, let me say that like most true Mainers, I don’t actually eat lobster, and honestly the purchase of them live skeeved me out. Back on topic, the drink of the night was Mojitos; a choice driven largely by the fact that we have a small forest of mint growing on the edge of the lawn. The sheer volume of mint cut did cause us to get a bit carried away, however. One contentious game of Hearts later and it was time to turn in.

Sunday, our expectations weather wise were tempered by the knowledge that a storm front was supposed to be rolling in, so after hitting Five Islands for lobster rolls and crabcake sandwiches, we made a quick pit stop at Reid State park. Traipsing over the rocks and the wandering down the beach a ways, we saw what was hands down the funniest thing I’ve seen in several years. An enterprising seagull had apparently made off with a 5 year old’s bag of potato chips – flying with it gripped tightly in its beak – but couldn’t seem to turn the trick of actually opening it. It therefore flew low, with frequent stops on the beach to try and penetrate the uncooperative bag. The 5 year old, meanwhile, accompanied by his little sister – who was maybe 3 and about as stable on her feet as a newborn colt – were relentlessly chasing the gull all over the beach in a vain attempt to recover their chips. Unfortunately – or fortunately for the bird – they were confused when it flew through a small collection of other gulls and they began chasing the wrong bird, who was understandably confused by the attention it was suddenly receiving. Every 30 feet or so the sister would stumble, fall, and get back up to rejoin the chase. One of those times you wish you had a video camera.

Leaving Reid and the gull chasing behind, we made a beeline to the outlets down in Freeport, where for the first time in recorded history I bought nothing from Patagonia. This, despite the fact that the already absurdly low outlet prices were discounter a further 40%. The group collectively did its part for the economic wellfare of Maine, however, dropping not inconsiderable amounts of money in a variety of stores in Freeport. After the females in our midst concluded a quick evening kayak, we continued our financial contributions to the area by dining out at the Osprey, followed by beers and more card games back at the compound.

All in all, about as strong a weekend as you could ask for. For superstitious reasons, I’m not going to reflect on the Sox games, but suffice it to say they made us quite happy. One interesting note, however, was the relative lack of folks From Away. Virtually no one was at Popham Beach when we cruised by it on the boat Saturday, despite the fact that it was a gorgeous day. Reid was busier on Sunday, but still well below capacity – as was Freeport when we were there. The single most convincing datapoint that the area didn’t see the tourists it might have expected, however, came in the fact that every restaurant we visited seated us immediately. If you’re a tourism dependent area, and you’re not at capacity on Memorial Day weekend, that’s not a good sign. I wonder how the rest of New England did, in a financial sense.

But the weekend, for us, was strong to quite strong. Best Memorial Day weekend I’ve had in a long while, I think, despite the notable absences of a couple of friends. Am back in the office this morning, and potentially in a real office by the end of the week – more on that later. Hope your holidays were similarly relaxing and rewarding, and look for regular commentary to resume shortly.